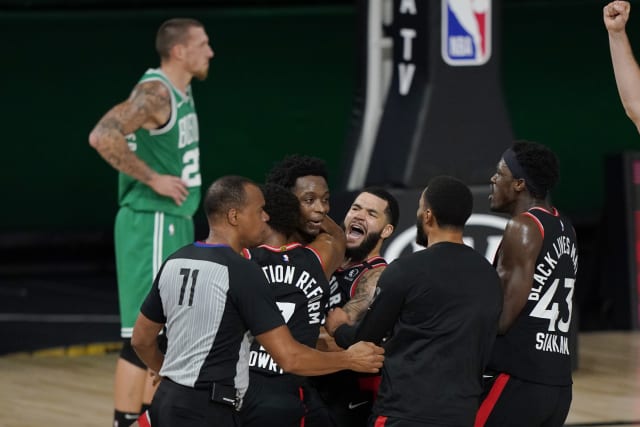 OG Anunoby’s three-point shot as time expired lifted the Toronto Raptors to a 104-103 win over the Boston Celtics to get back into their NBA conference semi-finals.

Boston went into the game with a 2-0 lead in the best-of-seven series but a moment of magic from London-born Anunoby halved the deficit for 2019 champions Toronto.

Daniel Theis dunked with 0.5 seconds left to give the Celtics a two-point lead, but Kyle Lowry, who had 31 points in the game but was only 2 for 8 on three-point attempts, found Anunoby with an inbound pass to seal the narrow win.

Elsewhere, the Los Angeles Clippers opened up their series against the Denver Nuggets with a commanding 120-97 win.

Kawhi Leonard scored 29 points for LA, who opened up a 29-point lead in the third quarter over the tired Nuggets, who were taken to seven games by the Utah Jazz.