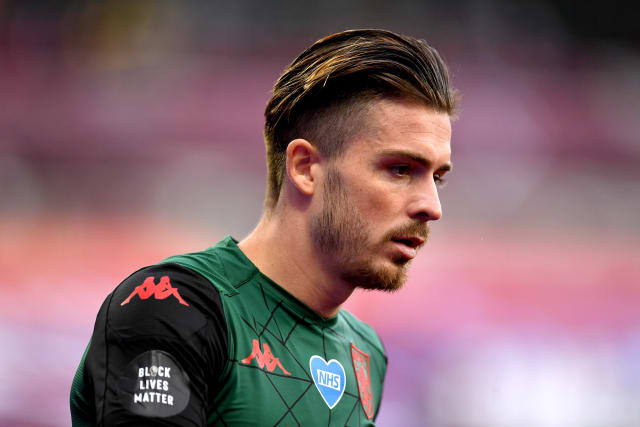 New boy Jack Grealish admits he feels like he is on trial with England following his late call-up by Gareth Southgate.

There was widespread surprise and some anger after the 24-year-old was left out of the initial Three Lions squad for this month’s Nations League double-header against Iceland and Denmark.

But the withdrawal of Harry Winks and, in particular, Marcus Rashford saw Southgate turn to the Aston Villa captain, who is in the senior squad for the first time since his switch from the Republic of Ireland to England was ratified in 2016.

“It’s more or less like a trial at the moment, coming in for the first time, and hopefully I can show (the manager) what I can do in training,” Grealish told Sky Sports.

“I’ve had Gareth as a manager before for the under-21s and loved my time with him. It’s him as a manager. I’ve been here for two days and I can see what type of manager he is.

“He’s made time for everyone, been around to everyone speaking to all the lads and staff, and I can tell it’s a very tight-knit group here.

“He wants to build on that, lads to come away with England and enjoy it and want to play for their country which I know for a fact that everyone does.

“I’ve had a bit of an unusual career, I was 19 when I said that I would like to change from Ireland to England, and at the time I didn’t think it would take five years.

“I had a chat with my parents, with Roy Hodgson who was the manager at the time, but you know it didn’t happen for certain reasons.

“We ended up getting relegated that season, and I’ve been in the Championship for three years now so it’s just a relief it’s finally come and hopefully I can be here to stay.”

Grealish has no regrets about switching nationality and is now dreaming of making his debut.

The 24-year-old was part of the squad that jetted off to Iceland on Friday afternoon, but Southgate raised doubt over his fitness in the pre-match press conference by revealing the Villa captain has been dealing with a knock ahead of the Iceland match.

“Jack had to miss a couple of days training early on with a problem he had from his club game at the weekend,” Southgate said.

“Not too serious, so he hasn’t had quite as much time on the training pitch but he’s fitted in fine.”

Grealish is among seven uncapped players in the 25-man squad for the double-header.

Dean Henderson is looking for his first England cap, while Conor Coady and Ainsley Maitland-Niles were brought into the squad on Saturday evening.

“With everything we’ve seen on the training pitch, we’d have no hesitation in starting any of the players that have been with us,” Southgate said of the latter duo and the squad in general.

“That’s why they’re picked in the first place but also then you’re never quite certain how they’ll adapt and how they’ll fit in with the group.

“But they’re two of another group of very exciting young players that are coming through the English system.”

There are just a handful of survivors from the chastening Euro 2016 exit to Iceland in the squad heading to Reykjavik.

Southgate used a back three to help steady the ship when he took over shortly after and is looking at testing the formation that got them to the World Cup semi-finals in upcoming matches.

“I think we’d want to continue to do that over the autumn because we’ve got to have some flexibility.

“If you’re rigid in the system that you have and then you lose players that are fundamental and maybe in some positions you’ve got a lot of options and in others not so many, then you’ve got to have the ability to switch.