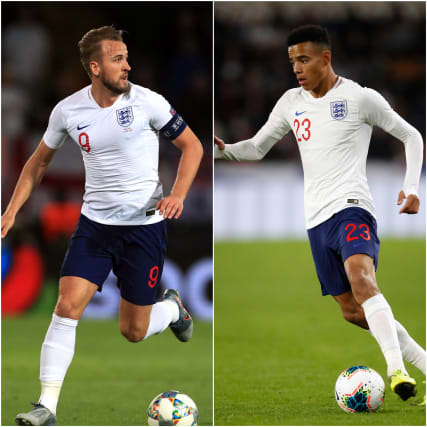 Greenwood, 18, was called into the senior Three Lions squad for the first time for the upcoming Nations League fixtures away to Iceland and Denmark.

A fine run of form for United once the 2019-20 season resumed following the halt caused by the coronavirus pandemic saw Greenwood make the cut.

Kane knows a little about what is required to find the back of the net at international level having hit 32 goals in just 45 England caps.

The Tottenham striker also won the Golden Boot at the 2018 World Cup and has now backed Greenwood to enjoy a fine international career.

“Mason has been great since the first training session we had,” he said.

“You can tell he is full of confidence as a player, he is not afraid to shoot, not afraid to take players on and that is exactly what we want.

“As a goalscorer people use the phrase: ‘He is a natural goalscorer,’ and I guess it is just one of those things, you work a lot on being in the right place at the right time.

“Some of it is just instinct, balls dropping to you in the box and being able to finish it but I guess, looking at him in the short time we have spent together, it is all different kinds of finishing – left foot, right foot, inside of the foot, powerful shots.

“I think that shows a really complete goalscorer when you can score in any situation. Obviously it has only been a short period of time but he definitely looks like a real top finisher and we look forward to having him in the squads to come because he is still very young.”

Kane was speaking on the eve of the Nations League opener against Iceland in Reykjavik.

The game will be the first meeting of the countries since Iceland shocked England to dump them out of Euro 2016 at the last-16 stage.

“It is definitely one of the toughest nights I’ve had in an England shirt,” Kane replied when asked about his memories of the game in Nice.

“But it is a game I have definitely learnt from, obviously that was my first international tournament at the time.

“I was still inexperienced at that level and even club-level really. All throughout the journey in my career I have always tried to take nights like that as a chance to learn and improve from.

“I think I have definitely done that as a person, I think the team has definitely improved over the last four years, so of course those games are always in your mind and you always think about what you can do better.

“But we have moved on well, we are in a great place as a squad, an exciting team and I think we are all just really excited to be back playing for England.”