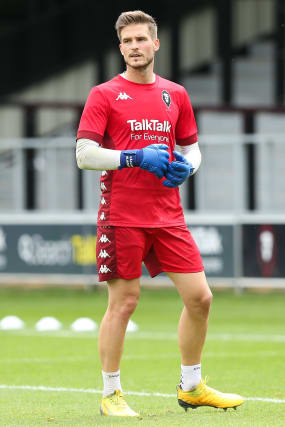 Vaclav Hladky is determined to help ambitious Salford secure promotion after seeing the possibility of joining Scottish giants Celtic and Rangers scotched in the summer.

Having arrived at St Mirren as a relative unknown in January 2019, the 29-year-old established himself as one of the best goalkeepers in Scotland during an impressive 18-month stint.

Hladky wowed onlookers with his displays after moving from Czech side Slovan Liberec and was a player in demand when leaving the Paisley club at the end of his deal over the summer.

Celtic and Rangers were linked with the goalkeeper along with a number of other clubs across Europe, but Sky Bet League Two side Salford pulled off quite the coup by signing the Czech shot-stopper.

“I’ve been speaking with many of the guys from the club and they told me about last season what happened and what they can improve.

“This is a big goal, a big opportunity to get a promotion because if you’re new in the league you’re just trying to get some new experiences: how they work, how the clubs in this league play.

“Now we have a lot of experiences from last season and we want to go up.”

When links to the likes of Rangers and Celtic were put to Hladky, he said: “There were many opportunities from Scotland and from abroad as well.

“If we talk about these two big clubs, obviously it’s a great opportunity to go there.

“I mean, I was between probably two or three goalies but unlucky for me they picked someone else.

Salford first got in contact with Hladky three weeks ago, with manager Graham Alexander helping to sell the club to the goalkeeper over Zoom.

Their ambitions and style of play was music to the 29-year-old’s ears, with the goalkeeper signing a two-year deal at the Peninsula Stadium following a memorable spell with St Mirren.

“It was up and down because I was when I was at Liberec three and a half years, I always had a good competitive battle with other goalies,” said Hladky, who called the May 2019 relegation play-off against Dundee United the game of his life after his penalty heroics.

“There were brilliant goalies: Martin Dubravka is at Newcastle, Tomas Koubek is at Augsburg now and before in Rennes in France, and obviously Ondrej Kolar, who is at Slavia Prague now and played Champions League.

“These three were amazing goalies and I still try to battle with them and be better.

“Then in the last year in Liberec I was number one and then I decided to try another journey, to go abroad and St Mirren needs a goalie.

“In St Mirren, it was an amazing 18 months and everything went very well. I could improve myself and show what I really know and what I really can.

“It was hard to leave because my relationship with every person in the club was brilliant and it was like a small family and small traditional club.

“My performances were very good and it was hard, but, you know, when you have some dream and you want to achieve some big goals, you have to move and you have to find another opportunity to go to a higher level.”

Hladky is in line to make his debut against Rotherham in the Carabao Cup on Saturday, before Salford take on Manchester United-23s in the EFL Trophy.

“It’s a good opportunity to start well,” said the goalkeeper, who is well versed in the Class of 92’s influence in the club given his long-standing love of English football.

“Of course it’s going to be a tough match against a club who were promoted last year.

“Then obviously a nice game against Manchester United in another cup and then we can start proper.”