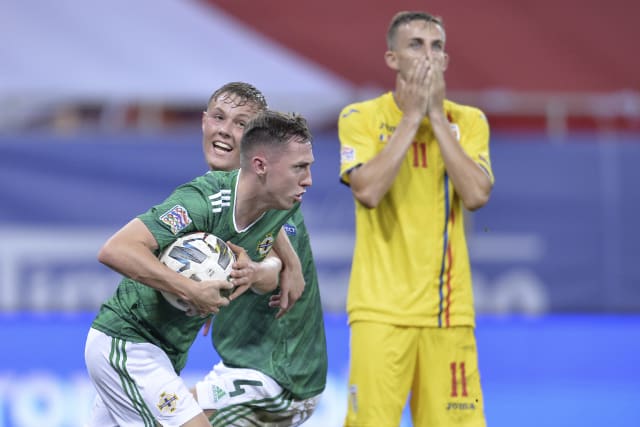 Gavin Whyte’s late header earned 10-man Northern Ireland an unlikely draw and their first ever Nations League point as it finished 1-1 against Romania in Bucharest, but manager Ian Baraclough owed a huge debt to his goalkeeper Bailey Peacock-Farrell.

The Green and White Army were frustrated for much of the night, falling behind when George Puscas poked Romania in front after 25 minutes, and then losing Josh Magennis to two soft yellow cards before half-time.

Peacock-Farrell made a string of top-class saves to keep his side in it in the second half before substitutes Kyle Lafferty and Whyte combined to snatch an equaliser four minutes from time.

There was still time for Peacock-Farrell to make another fine save, pushing Denis Alibec’s shot on to the crossbar.

The second half will offer huge encouragement to Baraclough – appointed to replace Michael O’Neill back in April but only now getting his first game in charge.

And much of it was down to another man who has endured a long wait for action, with Peacock-Farrell showing why Burnley have handed him a new contract if not yet a debut as he starred on his first competitive outing since Northern Ireland’s last match in November.

It was a cagey beginning, with debutant Daniel Ballard – in for the absent Jonny Evans – looking composed, but the match was frequently interrupted by the referee of Francois Letexier, who awarded 22 free-kicks in the first half alone.

It was from one of those in the 25th minute that Romania scored.

Northern Ireland lined up to defend a cross but Ianis Hagi centered for the unmarked Nicolae Stanciu.

Peacock-Farrell did well to get down as the ball flew through the crowd towards the bottom corner, but could only push it to Vlad Chiriches who squared for Puscas to tap home into an empty net.

It took another 10 minutes for Northern Ireland to threaten and it was the debutant Ballard who got on the end of the Paddy McNair’s free-kick, but he struggled to get any power into the effort and Ciprian Tatarusanu gathered comfortably.

Moments later, Northern Ireland were down to 10. Magennis could have considered himself unlucky to have been shown yellow 13 minutes in after an aerial tangle with Nicusor Bancu, and there was not much more in the second incident as Alexandru Maxim made the most of an arm across his shoulder.

A man down and a goal down, Northern Ireland were on the back foot throughout the second half as Peacock-Farrell took centre stage.

Puscas should have doubled the lead when picked out by Alexandru Cicaldau’s cross and perhaps thought he had before Peacock-Farrell got a strong hand to his header.

More routine saves followed but Romania were queueing up to shoot as Northern Ireland struggled to get out of their own half.

Peacock-Farrell clawed away Stanciu’s bending shot and was then beaten by his own team-mate in the 72nd minute as Corry Evans slid in to block Bancu’s cross but the ball bounced back off the post.

Baraclough had sent on Whyte and Lafferty in the hope of snatching something, and they did just that with four minutes of normal time remaining, with Lafferty heading on a long ball into the box and Whyte running through to nod home.

Peacock-Farrell joined the celebrations, but was then back on his line to push Alibec’s powerful effort on to the bar and secure the point.