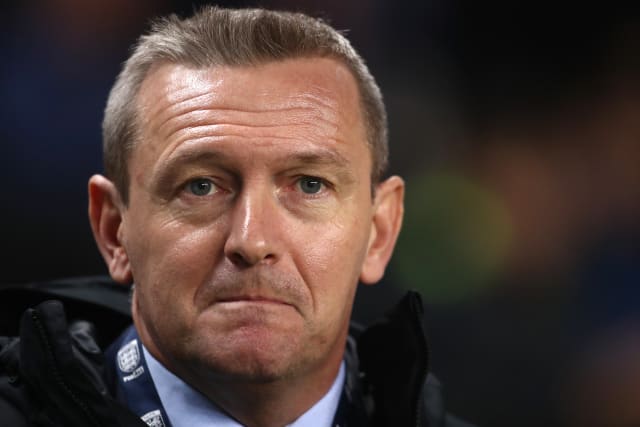 England Under-21s manager Aidy Boothroyd hailed his captain Eddie Nketiah after his hat-trick in a 6-0 rout of Kosovo.

The Arsenal striker scored a perfect hat-trick in a 10-minute spell early in the second half as the Young Lions made it five wins from five European Championship qualifying matches in Group Three.

Nketiah headed England in front in the 51st minute, fired home a left-footed finish and then converted a right-footed penalty to put Boothroyd’s side in control.

Jude Bellingham became England Under-21s’ youngest player when stepping off the bench in the second period and and their youngest goalscorer soon after when he curled home a superb sixth.

“I think Eddie is now two goals off the under-21s’ goal-scoring record, he’s two behind Alan Shearer, so that tells you his calibre of goal-scoring,” Boothroyd said.

“I’ve said a lot about Eddie. He’s not only a brilliant player, but he’s a brilliant guy.

“He played a real captain’s game tonight because they were rather heavy-handed with him let’s say, because they know he’s a threat, but he just gets up and gets on with it and gets goals.”

England struggled to get going in the opening stages at the Fadil Vokrri Stadium in Pristina in their first fixture in 10 months.

But they still dominated the first half and never looked back once Nketiah struck his opening header six minutes after the restart.

“We were a little bit rusty at the start,” Boothroyd said. “We haven’t seen each other for 10 months, so it took us a while to get going.

“We were very sloppy and played a lot in front of them, but the last 15 minutes of the first half we were much better.

Bellingham, who joined Borussia Dortmund from Birmingham in July in a deal which could rise to £30million, made an immediate impact off the bench.

Boothroyd added: “I didn’t want to throw him from the start, I wanted him to get a look at it, but I thought he was excellent.

“All the midfield players, Skippy (Oliver Skipp) and Tom (Davies) and Conor (Gallgher), before they got taken off, all did really well tonight.

“It was about managing minutes and I’m delighted Jude got his goal, he deserved it, and he’s given me a lovely problem for the next game.”

Boothroyd’s side travel to Austria for their next qualifying game on Tuesday.