Shane Duffy rescues a draw for Ireland after hectic week 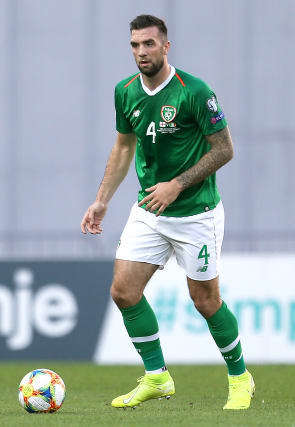 Shane Duffy capped an eventful week with a last-gasp equaliser to ensure new Republic of Ireland manager Stephen Kenny’s reign did not get off to a losing start in Bulgaria.

Skipper Duffy, who completed a loan move to Celtic from Brighton before heading for Sofia, scored a header in the third minute of stoppage time at the Vasil Levski Stadium to snatch a 1-1 Nations League draw.

It proved a bittersweet moment for the 28-year-old central defender, who was playing for his country for the first time since the death of his father Brian in May.

Duffy said: “It was tough, of course. It’s the first game where he’s not been here, so it was emotional, of course. But I’m a professional, I want to play football, focus on the game and know last minute there, he was probably looking down on me.

“But I’m a professional, I’ll get on with my career. I’ve got to move on, be strong and keep going, and that’s what I’m aiming to do.

“Overall I’m disappointed with the result and that we didn’t win the game, but it was important we didn’t lose the game.”

Asked about his week, he replied: “It’s been hectic, of course, and I’m just trying to get back to sharpness, back to match fitness.

“It’s been a tough year for me personally and on the pitch, so it was nice to get back out there and playing football again.”

Ireland were trailing to Bozhidar Kraev’s 56th-minute goal when Duffy struck in the nick of time give Kenny a boost, but also much to consider before Sunday’s hoe clash with Finland.

The manager said: “We’re disappointed we didn’t win tonight, but we didn’t lose and that point could be important.

“We showed a lot of quality and we made mistakes also, some good play and some room for improvement also.”

Kenny was particularly pleased with the contribution of 20-year-old Brighton striker Aaron Connolly, who lined up alongside teenager Adam Idah and Callum O’Dowda in a youthful front three.

He said: “He gives you something different in that front three in that he creates and scores goals, and he’s a handful. He had a decent game.”