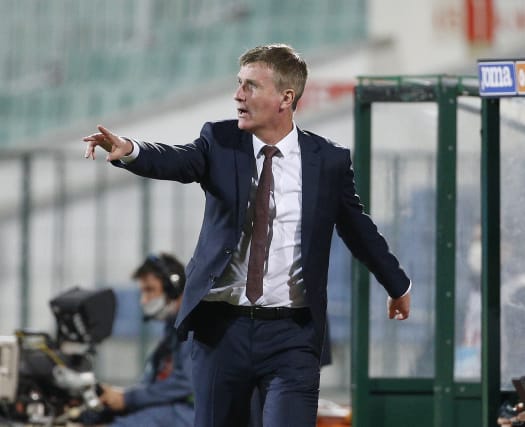 Kenny’s reign looked destined to begin with defeat in Sofia with his side trailing deep into injury time to Bozhidar Kraev’s 56th-minute strike.

But Duffy, who had been at fault for the Bulgaria goal, powered home a header in the third minute of stoppage time at the Vasil Levski Stadium to ensure it ended 1-1.

Kenny said: “It’s the ultimate honour to manage your country. There’s no greater honour, that goes without saying. In football, you can’t have a greater honour.

“But the players are just a really exceptional group of people, a very, very humble group and they give everything of themselves.

“We’re disappointed we didn’t win tonight, but we didn’t lose and that point could be important. We showed a lot of quality and we made mistakes also, some good play and some room for improvement also.”

Kenny made a series of bold decisions in Bulgaria – 19-year-old Norwich striker Adam Idah was handed a senior debut alongside 20-year-old Aaron Connolly in a front three which also included Callum O’Dowda – and asked his team to play on the front foot.

He said: “We controlled the game for long periods, I felt, and created some good chances, which we didn’t capitalise on.

For Duffy, who this week completed a dream loan move to Celtic and was asked to captain the side in the absence of Seamus Coleman, there was disappointment and elation in his first game for Ireland since the death of his father Brian in May.

He said: “It was tough, of course. It’s the first game where he’s not been here, so it was emotional, of course.

“But I’m a professional, I want to play football, focus on the game and know last minute there, he was probably looking down on me.

“I’m a professional, I’ll get on with my career. I’ve got to move on, be strong and keep going, and that’s what I’m aiming to do.

“Overall I’m disappointed with the result and that we didn’t win the game, but it was important we didn’t lose the game.

“It’s been a tough year for me personally and on the pitch, so it was nice to get back out there and playing football again.”