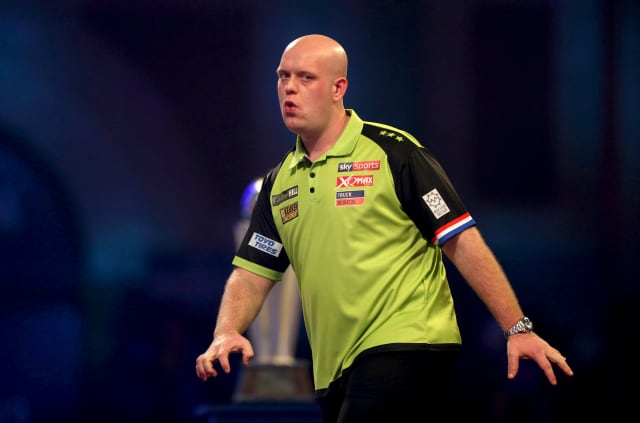 Michael Van Gerwen remains outside the Premier League play-off places after Glen Durrant won the last two legs to claim a hard-fought 7-7 draw against the world number one.

Van Gerwen had lost four of his most recent six contests and although he guaranteed himself a point with a 108 checkout in the 12th leg, he missed two match darts to allow Durrant to narrow the gap.

Durrant then held his nerve to land double one to leave Van Gerwen fifth in the standings after night 14, and the Dutchman has only two matches left to try to seal a semi-final spot at Milton Keynes’ Marshall Arena.

Durrant, sitting top of the table, is the only player assured of a semi-final place but Gary Anderson and Peter Wright inched closer to joining him.

Anderson nailed 50 per cent of his checkouts – including a 154 finish, the best of the night – in an 8-2 demolition of Michael Smith.

Wright was trailing Nathan Aspinall 5-3 at one stage but the reigning world champion reeled off five legs in a row to prevail 8-5 on a night where he averaged 103.11

Daryl Gurney can no longer qualify for the play-offs, despite taking out 130 in the last leg to seal a 7-7 draw with Gerwyn Price, who is one point off fourth-placed Aspinall and Van Gerwen.