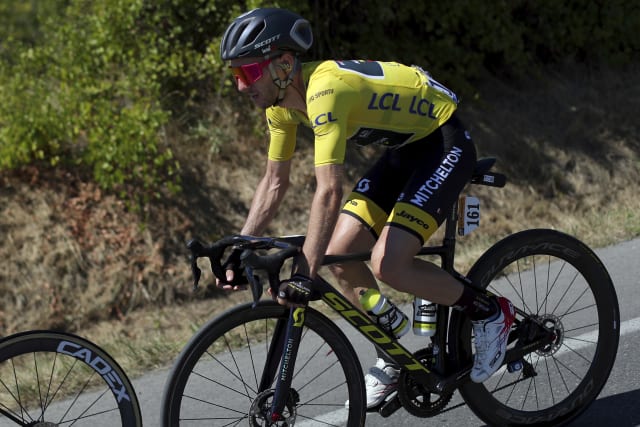 Adam Yates retained the yellow jersey as Alexey Lutsenko struck out from a breakaway to claim his first career Tour de France stage win on the climb to Mont Aigoual.

Yates, who on Wednesday became the ninth Briton to take yellow in the Tour after Julian Alaphilippe was hit with a time penalty, enjoyed a fairly relaxed day in the leader’s jersey, and was able to mark his rivals in the climbs late on the 191km stage six from Le Teil.

Though Alalphilippe made a point of attacking in the final metres, picking up a single second over the main pack, Yates was 10th over the line on the day to remain three seconds ahead of Jumbo-Visma’s Primoz Roglic in the overall battle.

The peloton crossed the line a little under three minutes after Lutsenko, who added to his 2017 Vuelta a Espana stage win with a strong effort out of the break.

An eight-strong group of escapees that included Irishman Nicolas Roche began to splinter on the main climb of the day, the Col de la Lusette, that formed part of the long drag up to the summit finish.

EF Education First’s Neilson Powless struck out in search of glory on his 24th birthday but Lutsenko followed and then left the others behind on the steepest sections of the climb before soloing to victory.

Earlier in the stage Sam Bennett had used the intermediate sprint to stretch his advantage over Peter Sagan to 12 in the points classification, ensuring the Deceuninck-QuickStep rider will enjoy another day in the green jersey.

And Team Sunweb’s Roche joined his compatriot on the podium at the end of the day, named the most aggressive rider after driving the formation of the breakaway.