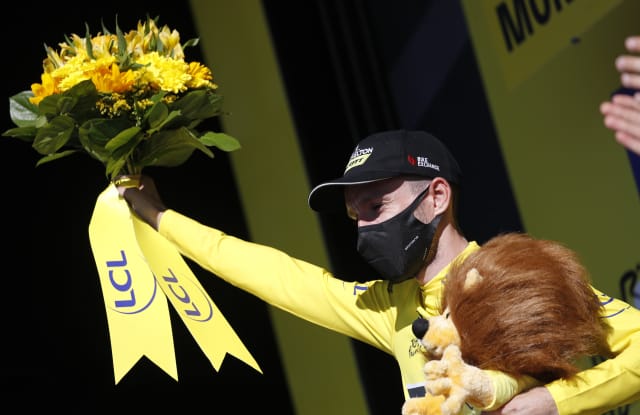 Adam Yates grew a little more comfortable in the yellow jersey after successfully coming through his first day as the leader of the Tour de France.

While Alexey Lutsenko won stage six from Le Teil to Mont Aigoual from a breakaway, Yates marked his rivals on the long climb to the finish to retain his three-second lead over race favourite Primoz Roglic, a day after a time penalty for Julian Alaphilippe thrust him into the race lead.

The Mitchelton-Scott rider, who had insisted last week he was only at the Tour to target stage wins after illness hampered his preparation, is now hoping to keep yellow through a testing weekend in the Pyrenees.

“It was nice,” Yates said of his first day in yellow. “I think we controlled it quite well. It was a strong break and a lot of guys wanted to get in there today. It was quite hard to control but we did a good job and I had Mikel (Nieve) and Esteban (Chaves) with me in the final.

“It’s a strange situation but I think we rode well today and hopefully did the jersey proud. Tomorrow is a sprint day and then there are two really hard days. I know a lot of those climbs and we’ve got a super strong team for the flats and the climbs so we’ll look forward to it.

“I still want to win a stage – that’s what we came here to do – but it’s pretty hard to throw away time when you’re leading. For now we’ll play it day by day and see what happens.”

As is expected of the leading team, Mitchelton-Scott did much of the work to control the gap to the eight-man break, which was sparked by Irishman Nicolas Roche soon after the flag dropped.

Even though his team-mates were on the front, Yates lived up to his nickname as ‘The Shadow’ as he hung on the back of the peloton for long stretches before moving up late in the day.

When he did, the 28-year-old got in some practice for his end-of-season move as he latched on to the Ineos Grenadiers train on the climb of La Lusette.

Attacks were kept to a minimum though Alaphilippe – no doubt keen to make a point after his costly illegal feed 24 hours earlier – did spring forward in the final metres to pick up a second, leaving him now 15 off the yellow jersey he surrendered.

This all happened almost three minutes after Lutsenko had crossed the line to claim his first career Tour stage win.

“This victory is very important for me,” the 27-year-old said. “This is the Tour de France, the most important race in the world. I’m very happy. I’ve worked so hard to get this victory. All this work has paid off.”

While the breakaway had their fun up the road, Sam Bennett used the intermediate sprint to stretch his advantage over Peter Sagan to 12 in the points classification, ensuring the Deceuninck-QuickStep rider will enjoy another day in the green jersey.

“It was amazing,” said Bennett, who is the first Irishman to lead any classification at the Tour since Sean Kelly won the points classification for the fourth and final time in 1989.

“Some people thought I was Peter – they are so used to seeing him in green so on the road side a lot of people shouted ‘Sagan’ at me. They’re not used to it but it was a lovely experience because I also heard my name being shouted a lot.”

And Team Sunweb’s Roche joined his compatriot on the podium at the end of the day, named the most aggressive rider after driving the formation of the breakaway, though it came as scant consolation.

“I’m exhausted and disappointed,” Roche said. “Most of the day I did pretty good, but the change of rhythm on the steep ramps of the category one climb killed me, and maybe I paid for going too deep at the start.

“That was the gamble today. I knew it was a chance but unfortunately I wasn’t strong enough to follow the other guys.”