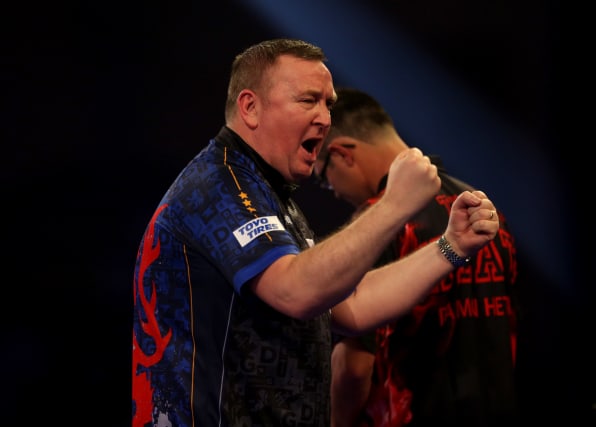 Glen Durrant remained top of the Unibet Premier League after beating Darryl Gurney 8-3 at the Marshall Arena in Milton Keynes on Sunday.

Durrant turned in another dominant display, averaging 102 on his way to opening up a 6-0 lead before Gurney avoided a whitewash by taking the seventh leg.

Middlesbrough’s Durrant has lost only one of his first 12 matches in the tournament and heads into the two-day break before Wednesday’s 13th night of action with a four-point lead from Gary Anderson.

Anderson leapfrogged Nathan Aspinall into second place after holding his nerve to clinch an 8-6 victory against the Englishman.

Aspinall hit back from 3-0 down to level it up at 4-4, but Anderson followed up Saturday’s draw with Durrant by finding double top to clinch a tense final leg.

Peter Wright missed out on his second nine-dart finish – and another £50,000 in prize money – in as many days as he lost 8-6 to in-form Gerwyn Price.

World champion Wright, who fired his first televised nine-darter in an 8-6 defeat to Gurney on Saturday, missed double 12 with his final throw while trailing 4-2 to Price in the seventh leg.

Price, who beat Michael Van Gerwen on Saturday, sealed his fourth win in his last five matches with a final 128 checkout to climb into the top four.

Van Gerwen avoided a fourth defeat in five matches by beating Michael Smith 8-5 in a repeat of the 2018 Premier League final.

Reigning champion Van Gerwen averaged 102.35 and hit four 180s as he bounced back from Saturday’s loss.

Kick It Out: Online hate figures could increase with fans barred from grounds