Valtteri Bottas sets pace ahead of Lewis Hamilton in Belgium 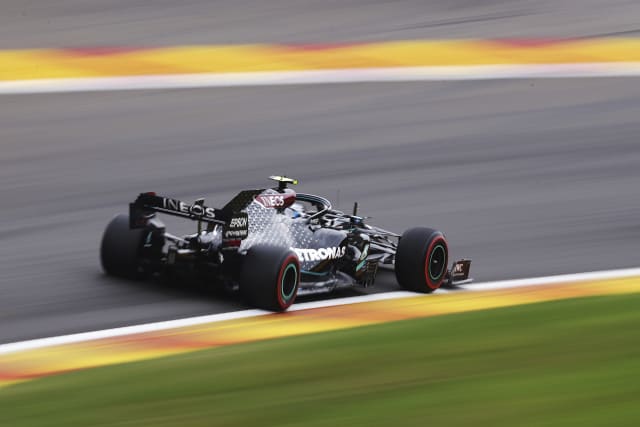 Bottas saw off his Mercedes team-mate at Spa-Francorchamps by just 0.069 seconds.

Red Bull’s Max Verstappen was within striking range of the Mercedes duo, the Dutchman finishing only 0.081sec behind Bottas.

Mercedes have dominated the new campaign, taking pole position at all six rounds and winning every race bar the 70th Anniversary Grand Prix at Silverstone.

But, although the black machines finished first and second here, Verstappen’s pace raises hope that it might not be a one-team show this weekend.

Verstappen is Hamilton’s closest challenger for the championship, 37 points adrift of the British driver following the opening six races.

Bottas is 43 points behind Hamilton and, despite finishing quickest, the Finn’s session ended prematurely with a front-left tyre puncture.

“I am used to these punctures,” said Bottas over the radio. “I had one last week on my road car, too.”

Ferrari are enduring a poor season and the scarlet cars were well off the pace on Friday morning.

Charles Leclerc, who won his maiden grand prix here last year, finished a lowly 14th, 1.26sec down on Bottas, while Sebastian Vettel was 15th, four tenths behind his team-mate.

British driver Lando Norris finished 10th for McLaren, 0.781sec off the pace, with George Russell 17th in his Williams.

The Haas duo of Kevin Magnussen and Romain Grosjean failed to post a single lap after they were sidelined with engine problems.

Alfa Romeo’s Antonio Giovinazzi also failed to get up and running after he was left in the pits with a technical failure.

The second session gets under way at Spa-Francorchamps on Friday afternoon.