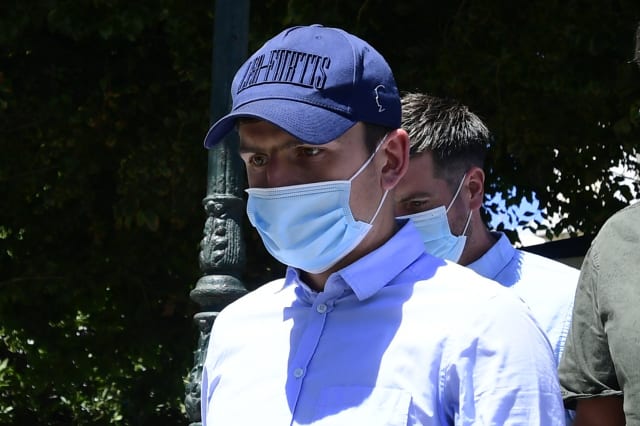 Manchester United and England defender Harry Maguire has vowed to clear his name after being found guilty of assaulting a police officer, swearing, resisting arrest and bribery by a Greek court.

The 27-year-old was arrested in the early hours of Friday after an alleged incident on the island of Mykonos, with the defender appearing at a hearing the following day in neighbouring Syros.

Maguire was not at the subsequent court case on Tuesday, when – just hours after receiving the backing of England manager Gareth Southgate – he was found guilty of a number of charges.

The world’s most expensive defender faced several charges along with Christopher Sharman and brother Joe Maguire, with the centre-back receiving a suspended prison sentence of 21 months.

Maguire said: “Following the hearing today, I have instructed my legal team with immediate effect to inform the courts we will be appealing.

“I remain strong and confident regarding our innocence in this matter – if anything myself, family and friends are the victims.”

The Football Association has yet to comment on the matter since a verdict was reached, but Manchester United released a statement.

The club said: “Manchester United notes the verdict of the Greek court today.

“Harry Maguire pleaded not guilty to all of the misdemeanour charges made against him and he continues to strongly assert his innocence.

“It should be noted that the prosecution confirmed the charges and provided their evidence late on the day before the trial, giving the defence team minimal time to digest them and prepare.

“A request for the case to be adjourned was subsequently denied.

“On this basis, along with the substantial body of evidence refuting the charges, Harry Maguire’s legal team will now appeal the verdict, to allow a full and fair hearing at a later date.”

The PA news agency understands Maguire’s team were angered and perplexed at the decision not to adjourn proceedings, having only received the charge sheet and near 50 pages of evidence late on Monday.

The conduct of Tuesday’s trial has frustrated those connected to the defence and there is hope that an appeal will allow for more evidence to be utilised, including forensic evidence demonstrating injuries to the defender and sister Daisy.

Maguire was among a group of four couples that went out in Mykonos on Thursday and the court heard the defence claim that Daisy fainted after being injected in a bar by two men.

Tensions became fraught and the group attempted to return to the villa, with the defence claiming undercover police directed the minibus to go the police station – something the group were not aware of.

A group of Greek men allegedly kicked Maguire and told him ‘your career is over’ when they got there. Fearing he was being robbed, Maguire’s attempts to get away saw him arrested and detained.

The defender denies allegation of bribery and sees any physical actions as self-defence towards individuals the group had not been aware were police officers.

Maguire relayed his version of events to Southgate ahead of his selection for England’s upcoming Nations League doubleheader against Iceland and Denmark.

“I have spoken with Harry. I have the insight to the story, which is very different to what’s being reported.

“And in these instances, I think you can only make decisions on facts that you’re aware of.

“Now clearly if facts change further down the line or information changes, then I have to review that decision.

“But I have a fantastic relationship with the boy. Harry has been an outstanding character for us.

“I have no reason to doubt what he’s telling me and, you know, it’s important that he knows that he’s got my support at this moment.”