Rangers hoping to have Joe Aribo back against Kilmarnock – Steven Gerrard 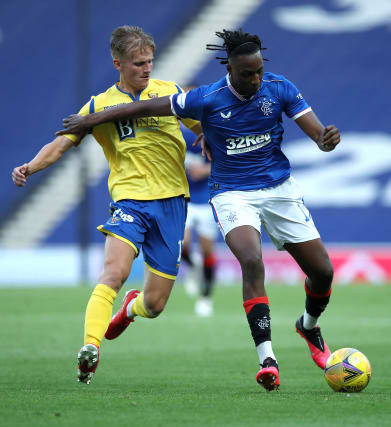 Rangers boss Steven Gerrard is confident Joe Aribo will be fit to face Kilmarnock next Saturday.

The Light Blues playmaker was badly missed by his side as they laboured to a goalless Premiership draw at Livingston.

The result cost Gers the chance to move two points clear at the top of the table.

But Gerrard is relieved the ankle knock which kept him out of the Tony Macaroni Arena will not rule him out of Killie’s Ibrox visit this weekend.

He said: “I’m hoping to have him back for next weekend. He’s got a small ankle problem that we scanned. There’s a bit of swelling in there which is obviously a big risk coming to a surface like this.

“We made the sensible call but I think we certainly missed Joe today as he’s obviously a game changer in the final third.

“We threw everything we had at it. It was only really Greg Stewart – from an attacking point of view – that we never threw on.

“We started with a front four. Good players normally, who a lot of the time win games for us and we added a lot of good players to it.

“So you know, it’s a frustrating one but it’s important to stay calm and move on.”

Meanwhile, Gerrard says it is down to Greg Docherty to decide if he will be joining Hull after admitting his Ibrox career is over.

Ross McCrorie is also weighing up a move to Hibernian and Gerrard said: “We are waiting for Greg to make a decision.

“Hull are at the table with a good deal and opportunity for him. It’s not going to work for Greg at Rangers so we are waiting on his decision.

“Ross is close. He has a couple of options on the table. Again, we are waiting for a decision really.”