Bruno Fernandes: I need to do much better to deserve Eric Cantona comparisons 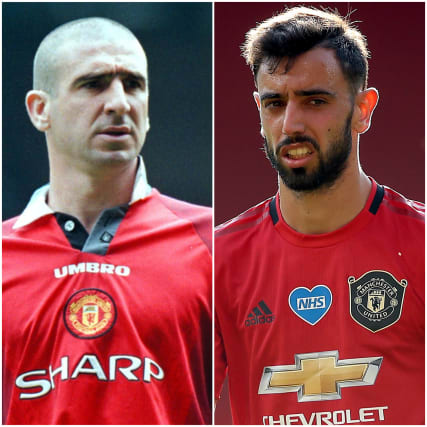 Bruno Fernandes played down comparisons to Manchester United great Eric Cantona as the playmaker looks to end an impressive season as a Europa League winner.

After months of speculation and weeks of drawn out negotiations, the 25-year-old finally made his big-money switch from Sporting Lisbon to Old Trafford in January.

Fernandes has had a transformational impact at United, with his ability to provide goals and rouse the troops helping Ole Gunnar Solskjaer’s men to a third-placed Premier League finish and a spot in the Europa League semi-finals.

Cantona had a huge impact when arriving from Leeds midway through the 1992-93 season and helping Sir Alex Ferguson’s side to a long-awaited league title.

Asked what he makes of comparisons to the United great ahead of the semi-final clash with Sevilla, Fernandes said: “Of course for me it is really good to listen (to people) talking about them names.

“But really for me, Cantona was an amazing player for the club, I need to do much, much, much better to be compared with him.

“I’m really happy for what I did. I’m not satisfied, like the coach said.

“For me, I come to Manchester and it’s about winning trophies. I come for the club to win some trophies and I will be happy at the end of the season if we win the Europa League.”

Fernandes sealed United’s place in the Europa League semi-finals by keeping his nerve from the spot, securing a 1-0 extra-time victory against FC Copenhagen on Monday.

It was just the latest key impact made by the Portugal international, who has taken to life under Solskjaer like a duck to water.

“I can’t say it was easy but, of course, we have had good results,” Fernandes said.

“I was scoring some goals, but for me it was easy because the team helped me a lot. Everyone in the club helped me – the staff, the coach, everyone pass me a lot of confidence – so it was much easier for me.

“Maybe I think I play already in Italy, so I know how it is to be out of my country playing in different leagues. Of course, Premier League is completely different, but I have the confidence of my team-mates, from the coach, from the staff, from all the club.

“I think things are going really well because when you have the confidence from everyone you can do your game and try to do your best.

“When a club pay for a player 55 million (euros), you have confidence from the club! From there starts everything.

“Of course, all the conversations I have with the coach and with my team-mates, and, as I say before, the coach all the time speak with me and said to do my game, try to do what I already did in Sporting, to have the same confidence, to try the same things, to improve. So when you have that voice on your back to do your own game and helping the team with that it’s easier for you.”