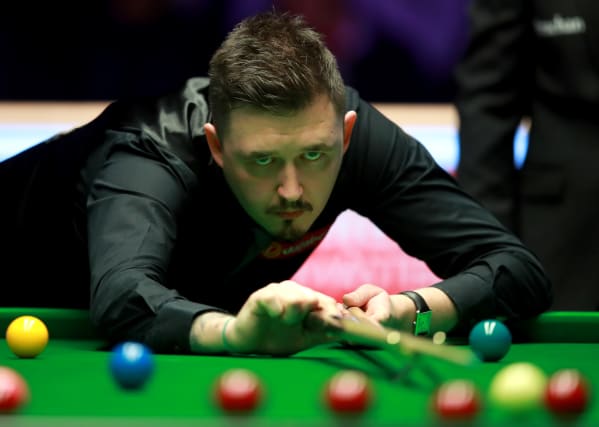 Kyren Wilson collapsed over the line while Ronnie O’Sullivan conjured a timely reminder of his erratic genius as both World Championship semi-finals were settled by final-frame thrillers for the first time.

Wilson fluked the green off three cushions to seal victory over Anthony McGill in an outrageous final frame which featured 186 points, while O’Sullivan looked on the cusp of defeat to Mark Selby only to blast back with three straight frames to reach the final for the seventh time.

Wilson struggled to contain his emotions at the end of what he described as a “mental” match, and added: “I can’t believe it ended like that – I didn’t want to send someone home on a fluke.”

Shell-shocked McGill, who had forced his way back into the match after trailing 13-11 overnight, had missed the first chance to win it when a bad split on the reds saw him run aground on 39.

McGill, who had already battled through two final-frame deciders in the tournament, paid rich tribute to Wilson but added: “I feel like I’ve had something stolen from me – not by Kyren, but by the snooker gods.”

After McGill missed his own opportunity in the decider, Wilson also came up short when he missed a straight red to the middle to bring a break of 47 to an end.

But with the black teetering over the top pocket, Wilson proceeded to snooker McGill on a nearby red and the Scot missed it eight times in a row – costing him 35 points and resulting in him requiring snookers.

Yet remarkably Wilson duly stepped up to play the next shot and proceeded to screw the white back into the middle pocket, restoring McGill’s ability to win frame and match outright.

The elusive red then became perched tight on the top lip of the middle pocket, with both players trying and failing to pot it via the bottom cushion.

McGill managed it at his second attempt but with the colours seemingly at his mercy he snookered himself on the green – which Wilson also subsequently missed to effectively take the match.

After an extended safety battle, Wilson fluked the green and appeared to struggle to contain himself, before regrouping to resist McGill’s final attempt to summon one last twist.

Wilson added: “I played a great snooker that I thought had won me the match and if it had finished there it would be a different story, but I went in off the red.

“I couldn’t believe what was happening. It was absolutely mental. It was one of the best semi-finals you’ll ever see but I wish it hadn’t ended the way it did.”

Wilson now faces the difficult task of composing himself for his final debut on Saturday but insisted he will be doing everything he can to resist a repeat performance.

He added: “You can’t just rely on luck to get you a world crown and, whoever I play in the final, I’ve got to produce great snooker and I’m not going to get there by fluking balls.

“I can go out and enjoy the occasion and give it my all. I’m going in there to win the world title, but to have the pressure on the other guy hopefully plays in my favour.”

There had been few hints of the drama to come when Wilson returned at the start of the session to stretch his lead to 14-11 with a break of 94.

But qualifier McGill stormed back with consecutive breaks of 84, 87 and 122 to achieve parity at the mid-session interval.

Wilson nudged back in front with a break of 82 but McGill appeared unfazed and pulled back level before a nerveless 98 sent him one frame from victory.

Wilson forced the decider after a re-rack, but neither player could possibly have envisaged the drama that was about to unfold.

The conclusion of the second semi-final followed a similar pattern as O’Sullivan produced a scintillating recovery from the brink of defeat to book his place in his first Crucible final since 2014.

The 44-year-old looked to have lost focus when he lashed wildly at a final pink and enabled Selby to sweep one frame from victory at 17-15.

But O’Sullivan responded in extraordinary fashion, blasting a 138 total clearance followed by an equally quickfire 71 to conjure another Crucible decider.

O’Sullivan looked set to be rewarded for an aggressive split but he broke down on 64 within two balls of effective victory, but Selby’s response also floundered when he ran out of position on the final red.

After an extensive period of safety play – including another wild lash by O’Sullivan – it was Selby who wobbled, catching the middle jaw with a red and allowing his rival to sweep up and seal an improbable victory.