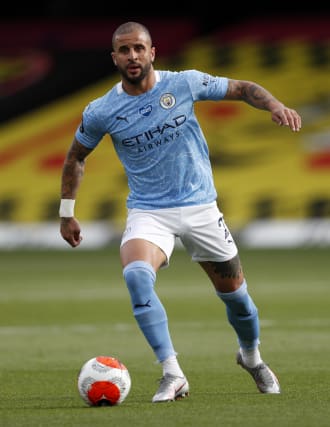 Kyle Walker has no doubt the Champions League is now the prize Manchester City want and need the most.

The next step is to transfer that dominance onto the European stage. In a decade of competing, the club’s best showing in the Champions League remains the semi-final stage they reached under Manuel Pellegrini in 2016.

Right-back Walker said: “I think if you had asked me this two years ago when I signed here, I would have probably said that the Premier League was the big one for me having not won it before.

“Now I have collected two of them and a number of others and this is the one that I want, and I can probably speak on behalf of the whole squad and Manchester City as well for what they need as a club to put them onto that next pedestal.”

The final stages of this year’s competition have been repackaged as a mini-tournament in Portugal as a result of the Covid-19 pandemic. City continue their latest challenge against Lyon in a one-legged quarter-final at Sporting Lisbon’s Jose Alvalade Stadium on Saturday.

The new format is unfamiliar and will allow less margin for error, but Walker believes it could suit City’s style.

The 30-year-old said: “It is a unique situation that we are in but I feel like we just have to attack it as we attack every game, whether that is in the Premier League, cups or Champions League.

“We feel that our team as a whole and the way that we play and our philosophy is going to stand us in good stead to get us to where we want to be in the tournament, which is the final.”

City confirmed their place in the quarter-finals with victory over 13-time winners Real Madrid in the long-delayed second leg of their last-16 tie last Friday.

Claiming the scalp of the newly-crowned Spanish champions has given City plenty of confidence, but Walker warns Lyon cannot be taken lightly.

The French side took four points off City, including a win at the Etihad Stadium, in last season’s group stage. They also arrive in the Portuguese capital in high spirits themselves after seeing off perennial Serie A winners Juventus.

Walker said: “I think (that) speaks volumes. This year they don’t have the players that they had when we played against them but you need to be a very good team, very disciplined, to beat Juventus over two legs.

“We are just going to use the gameplan, listen to the tactics from the boss and hopefully that will see us over the line.

“I feel it can swing our way in that it is over just the one leg and we can really attack the game and play every game like a final.”