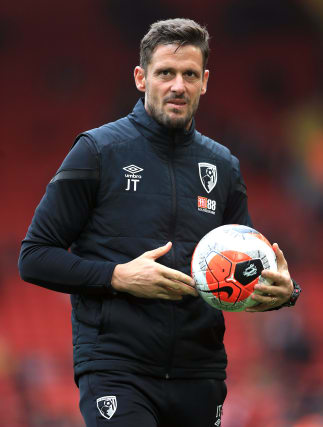 New Bournemouth boss Jason Tindall revealed he was pestered to take the job by his 10-year-old son.

Tindall, who is targeting an immediate Premier League return for the Cherries following relegation, was away on holiday when he he learned long-serving predecessor Eddie Howe was leaving.

The 42-year-old subsequently discussed the situation with his wife, conversations that were picked up on by persistent son Levi, a member of the club’s youth team.

“It was a week that I certainly wasn’t expecting going into the holiday,” said Tindall.

“When he (Howe) finally made his decision to step away from management for the time being it was as a shock for me.

“Me and my wife were having discussions and kids being kids are listening in and hearing what’s going on.

“Because they know how close our relationship was and what that entailed then you’re getting the questions of, ‘What are you going to do, Dad?’

“The more you then think, ‘What am I going to do?’, you then think a little bit deeper and you end up coming to the decision that I ended up making.

“He’s obsessed with football, he’s been born into football. He lives and breathes football, so he’s very excited.”

Tindall worked as assistant to Howe for more than 11 years in two spells with Bournemouth, either side of a 21-month stint at Burnley, and the pair have remained in contact.

He does not know what his former colleague next’s career step will be but does not expect Howe to walk away from football.

Asked how much time off Howe will take, Tindall replied: “That’s the magic question. I think that’s a question that Ed himself wouldn’t be able to answer.

“When you’ve been in the hotseat for as long as Ed and the pressure that comes with, at some stage it takes its toll.

“Ed then made a personal decision that now was the right time to step away and no doubt spend some quality time with his family.

“Knowing the love Ed has for the game, I don’t think he will ever turn his back on the game.”

Tindall’s only previous managerial role came at non-league club Weymouth between 2007 and 2008.

He added: “I’ve been standing side by side to Ed for 12 years now and if I’m not ready for this job now then I don’t think I will ever be ready.”

‘Many clubs won’t be able to withstand’ lack of fans at games, EFL chairmen warn