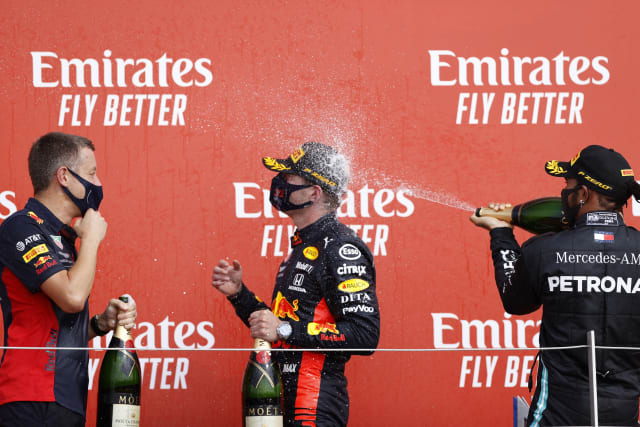 Lewis Hamilton has told Max Verstappen he is up for the world championship fight after the Red Bull driver delivered a shock win at Sunday’s 70th Anniversary Grand Prix.

Verstappen is now Hamilton’s closest rival for a record-equalling seventh title after the 12/1 outsider took advantage of Mercedes’ tyre woes to cruise to the chequered flag at Silverstone.

Mercedes have been the class of the Formula One field this season – and were expected to race away to a fifth triumph from as many rounds after they locked out the front row.

But Hamilton and team-mate Valtteri Bottas finished second and third after the perfect storm of hot track temperatures and softer tyre compounds worked against their all-black machinery, and into the hands of the masterful Verstappen.

The Dutchman is now 30 points behind Hamilton ahead of next weekend’s Spanish Grand Prix.

Up until Sunday’s race, Hamilton looked on course to gallop towards Michael Schumacher’s record, but Verstappen’s ninth career win breathed life into a season which threatened to be a one-man show.

“It’s great that Max won,” said Hamilton. “As I said before I want to have races and a challenge.

“Obviously the Red Bull seems to be quite close to us in race conditions, but that’s a good thing, and it will be interesting to see their progression through the rest of the year.

“I definitely will not overlook them. We will keep a close eye on them. It’s not going to be easy by any means. I don’t think my team has that mentality anyway. And maybe in the future we will get to have a bit more of a race.”

A week after Hamilton limped over the line on three wheels following a last-lap puncture, tyres again took centre stage at a deserted Silverstone.

Pole-sitter Bottas beat Hamilton to the opening bend – but the Mercedes duo were chewing through their rubber at an alarming rate to provide Verstappen, who started fourth, with the sniff of victory.

After he blasted past Racing Point’s Nico Hulkenberg off the line, Verstappen set about hunting down the Mercedes duo. At one stage, his race engineer, Gianpiero Lambiase, told him to drop off Hamilton’s car to protect his tyres.

“This is the only chance to beat Mercedes,” he yelled over the radio. “I am not going to sit back like a grandma.”

Verstappen remained true to his word. He took the lead after the struggling Mercedes pair pitted for fresh tyres – and was then on Bottas’ gearbox after making his first stop on lap 26.

Verstappen needed just a handful of corners to bat Bottas aside, overcoming the Finn’s mediocre defence before making the race-winning move stick on the exit of Luffield.

He crossed the line 11.3 seconds clear of Hamilton, who, on a different strategy, passed Ferrari’s Charles Leclerc with seven laps to run and then Bottas with two to go, to salvage the runner-up spot and his 155th career podium – a record he now shares with Schumacher.

So comfortable was Verstappen’s win that on the last lap he found time to remind Lambiase to use hand sanitiser before the imminent celebrations.

Responding to the “grandma” radio remark, Verstappen said: “I hate sitting back, so when I saw the opportunity to put a bit of pressure on I wanted to do that.

“Sometimes it can be suicide by killing the tyres, but that wasn’t the case today. It is an incredible result to win here and we just had a great day.”

Vettel, who is being moved on by Ferrari at the end of this year, spun on the first lap, blasted his team over the radio for a decision on strategy, and crossed the line in 12th. He is 13th in the championship with just 10 points to his name.