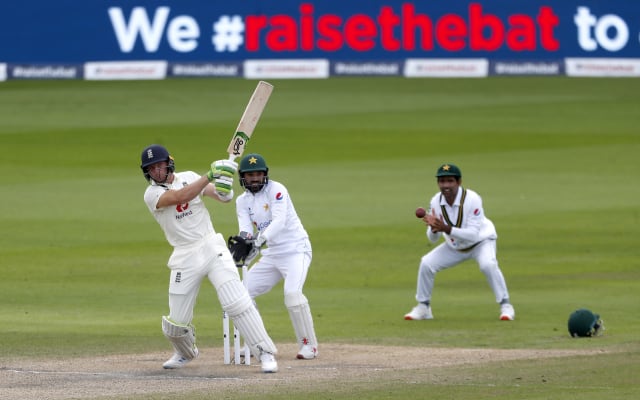 Jos Buttler and Chris Woakes were leading a spirited counter-attack as England reached 167 for five in pursuit of 277 on the fourth afternoon of the first Test against Pakistan.

A 64-run stand between Dom Sibley and Joe Root had set a strong foundation for what would need to be the second highest chase ever recorded at Emirates Old Trafford but a promising score of 86 for one subsided to 117 for five as the tourists swarmed.

Buttler and Woakes then grabbed the initiative in brazen fashion with an unbroken 50-run stand at better than a run a ball before tea.

The day began at full throttle, 16 balls, 32 runs and two wickets enough to wrap up the Pakistan innings in a blur. Yasir Shah was the catalyst, hitting three fours and a slogged six off Stuart Broad before nicking the seamer behind.

Jofra Archer ushered in the business end of the match by running through Naseem Shah with a yorker.

With almost two days to play England began their innings in watchful mode, careful to avert a repeat of day two when they lost their first three wickets inside six overs. Rory Burns and Dom Sibley duly soaked up 11 overs before the former fell to a fractional lbw decision.

Mohammad Abbas was on the verge of going empty-handed after a fine new-ball spell but persuaded Richard Kettleborough to raise the finger even though the ball hit the thigh pad. Burns queried on height but ball-tracking showed the bails being skimmed.

Root joined Sibley and the pair successfully quietened things down to reach lunch on 55 for one. There was one early scare for Root after Yasir entered the fray, just missing with the same back cut that cost his wicket last time around.

Other than that the pair smothered the spin, picking up 10 singles and one four when Root tucked into a full toss. Consolidation was the gameplan as the afternoon got under way, both batsmen accumulating slowly on their way to a half-century stand.

Root had just started to accelerate when Sibley broke ranks, swinging hard and edging Yasir to slip. He made firmer contact with his own pad as he lashed out in frustration and fled the scene.

He was replaced by Ben Stokes, whose partnership with Root carried much of the team’s hopes. It did not live up to the billing, adding only 10 before the captain pushed at Naseem’s rising delivery in the channel.

He was perhaps aiming for third man, which had started to become a useful outlet, but instead fenced to Babar Azam for 42 and Pakistan now zeroed in on Stokes, tossing away a review to a frivolous lbw shout.

England’s most likely match-winner was gone in the next over, bamboozled by a ball that climbed out of nowhere from Yasir and brushed the glove on its way to the keeper. Azhar Ali almost let the chance go when it was turned down on-field but made the signal with a couple of seconds to spare.

From 86 for one England were soon 117 for five, Shaheen Afridi seeing one explode off the pitch and leave Ollie Pope with no other option than to pop a loopy catch to gully as he flinched away.

England appeared to be heading for a swift defeat until Buttler and Woakes came together and threw caution to the wind, driving the ball sweetly, finding plenty of gaps and sharing in nine boundaries to take their stand to an even half-century in just 49 balls.