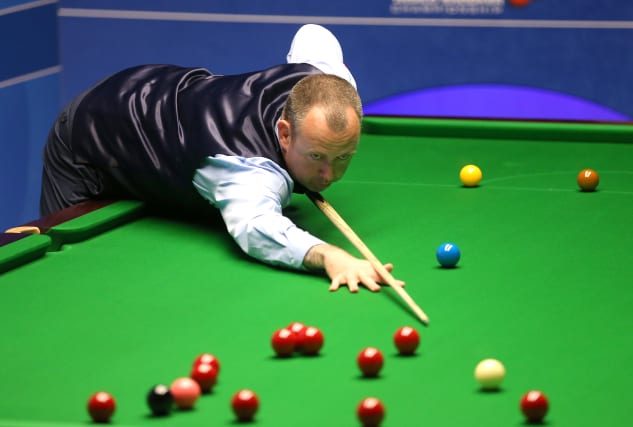 Mark Williams revealed how a blunt appraisal of his performance from his 13-year-old son Kian spurred him on to beat Stuart Bingham and book his place back in the World Championship quarter-finals.

The three-time former winner turned an 8-8 overnight tie into an impressive 13-11 win over his fellow former champion, taking him into the last eight at the Crucible for the ninth time where he awaits either Ronnie O’Sullivan or Ding Junhui.

Williams said: “I walked in and the first thing he said was, ‘why are you so crap?’ I’m going to take him on the golf course this afternoon and give him an absolute b******ing because of all the stick he’s been giving me these last few days.”

The 45-year-old Williams emphasised his newly-relaxed demeanour during the marathon tussle, laughing at himself for missing a simple black in frame 11 and tweeting about the “best of 5” showdown as the pair sat locked at 10-10 at the mid-session interval.

A break of 74 moved Williams two frames from victory before Bingham fought back with a superb 48 to make certain of another tight finish following Kurt Maflin’s famous victory over John Higgins the previous night.

But just as Maflin had ultimately pulled away to victory, Williams seized his second chance in the 23rd frame then avoided a decider with a break of 75, keeping alive his chances of emulating fellow Welshman Ray Reardon and winning the world title at the age of 45.

“I always really enjoy it and even though I was throwing frames away in the first session I was still enjoying it – it’s only a snooker match,” added Williams. “If I lost it today it wouldn’t have been through lack of trying.”

A fourth title for Williams would haul him level with Higgins on the all-time list yet, having clambered back to the top of his sport following his unlikely 2017 success, Williams continues to resist comparisons with the so-called ‘Class of 92’.

“They (O’Sullivan and Higgins) are a class above me,” Williams insisted. “When I came through I was always behind them, and I was just happy to nick some tournaments off them. You can’t really put me in the same bracket.

“I thought I wasn’t going to win it again but I managed to scrape through and win a third one. Now I’m in the quarter-finals I’ve got as good a chance as anyone. I’m only one behind John Higgins now so if I did win it again it would be unbelievable.”

Judd Trump reeled off six frames in succession as he turned a 5-3 overnight deficit into a 9-7 lead over Chinese 16th seed Yan Bingtao.

The defending champion pulled through two marathon openers to pull back level then fired breaks of 88 and 73 as he guaranteed an advantage heading into Friday evening’s concluding session.

But Yan rallied to win the final two frames of the session, including a fine 89 clearance, to leave the world number one far from certain of his progression back into the last eight.