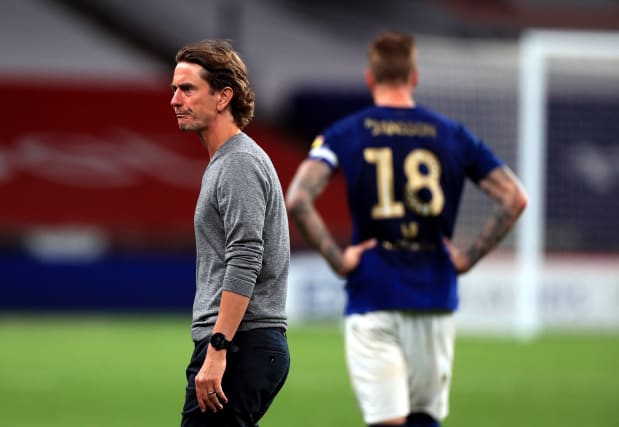 Brentford head coach Thomas Frank is confident they will have a very strong side in the Sky Bet Championship next season but conceded nobody knows whether they will keep hold of their best players.

An extra-time double from Fulham’s Joe Bryan earned the Whites promotion back to the Premier League with a 2-1 win at Wembley.

It meant Brentford, who missed the chance to go up automatically on the final day of the regular season, remain in the second tier and have now lost in nine play-off campaigns.

The Bees ‘BMW’ strike force of Said Benrahma, Bryan Mbeumo and Ollie Watkins scored 59 goals in the 2019-20 season and have attracted plenty of admirers along the way.

Asked if Brentford can keep their best players, Frank admitted: “I must say it is not my biggest concern right now.

“The reason why I am most down at this moment of time is for mainly for the fans, for (owner) Matthew Benham and for all the people who have been at this club for many, many years and they deserve so much to be in the Premier League.

“I also care and believe so much in this group of players and I am very disappointed we won’t have the opportunity to attack the Premier League.

“Nobody knows what will happen tomorrow, I just know one thing and we will have a very, very strong side going into the Championship for next season.”

Brentford scored more goals in the regular campaign than Leeds and West Brom and had the second best defensive record in the division to finish third; only two points off second place and automatic promotion.

After coming 11th last season, the west London club have made great strides under Danish boss Frank and will be in a new 17,500-seater stadium next month after they bid farewell to Griffin Park in July.

There is plenty to be positive about for the Bees but their head coach warned they must find a way of bouncing back from this disappointment which saw them miss out on approximately £160million in revenue.

“First it is important everyone relaxes for a few days and actually finds out the sun will rise again and it is not the end of the world,” Frank added.

“Of course I will be very sad and disappointed, but that is the way it is. I know in football and life you need to be strong because there will be situations that will not go the way you want and you need to show resilience.

“If you want to achieve something you need to be able to bounce back from setbacks and I know we are coming back even stronger next season, I am 100 per cent sure of that.”