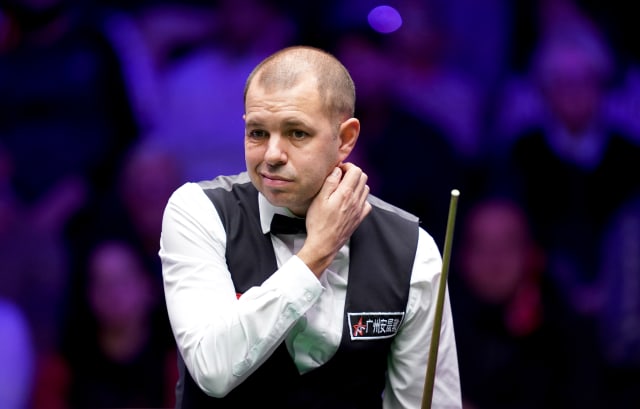 Barry Hawkins admitted after thrashing Alexander Ursenbacher at the World Championship that he had been “getting a little bit sick of snooker” prior to lockdown.

Hawkins, having gone into Wednesday afternoon’s session 7-2 up in the first-round contest, swiftly added the three frames he needed without a reply from his Swiss opponent.

The 2013 finalist was asked afterwards if, with his form having not been at its best this season, lockdown had come at a good time for him.

And he said: “It came at the perfect time for me because I was just at that point where I was just getting a little bit sick of snooker, and I think to be honest with you a lot of players were.

“We’ve played so much over the last few years. I think it was just starting to drain me a little bit. It was nice to put the cue away. I didn’t hit a ball for three months.

“It was nice just to spend some time at home – although after a month or two you are starting to go a bit stir crazy. I was actually looking forward to playing again. I’ve got a new cue now and it’s given me that little extra incentive to go and practise.

“I’ve tried to change my lifestyle a little bit, the fitness, healthy body, healthy mind. I’m going to try to keep it going and hopefully I can start producing some of the form I’ve showed before.”

Asked if the number of tournaments needed to be cut down, Hawkins said: “I’m not sure because we want as many tournaments as possible.

“Sometimes the scheduling, I know it can’t be helped because of venues and logistics, but sometimes the back-to-back tournaments are quite tough.

“I know a lot of players would ideally love a little space in between so they can go home and prepare properly for the next tournament.

“Sometimes they are so close together you feel like you just are living out of a suitcase, going from one to the next, and you end up sometimes picking bad habits up along the way.”

He added: “It was a much-needed break, much-needed time just to switch off, relax and chill.

“Then I was ready to start practising again and I really enjoyed just trying to put the hours in and going around playing a few players again. We’ll see how long it lasts!”

Hawkins, who will face Neil Robertson in round two, punished mistakes by 24-year-old Crucible debutant Ursenbacher, the first Swiss player to appear in the tournament’s finals.

The 41-year-old, who posted a break of 84 in Wednesday’s opening frame, said: “I’m pleased with how I concentrated. A couple of mistakes but I’m pleased to get through.

“I know he (Ursenbacher) is a dangerous player. I think a bit more experience under Alexander’s belt will probably develop his all-round game a bit better. It’s tough coming here first time. I think I lost 10-1, so he did a bit better than I did.”