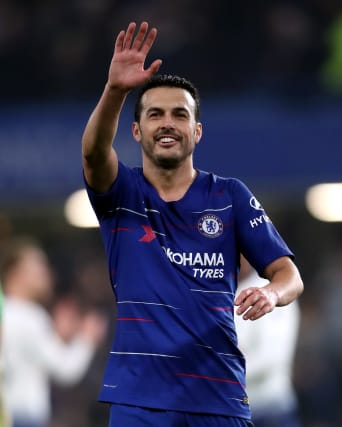 Pedro has undergone surgery on his shoulder and will not play for Chelsea again.

Before making his long-mooted move to Roma, the Spain winger confirmed on social media that his operation had been successful.

The 33-year-old landed awkwardly on his right shoulder when appearing as a substitute in the Blues’ 2-1 FA Cup final defeat by Arsenal at the weekend.

“The surgery went well, I will be back soon,” Pedro posted on Instagram. “It was a pity not to win the FA Cup. Thank you for all your support.”

Pedro has spent five years at Chelsea having joined the Blues from Barcelona in 2015.

The reliable forward helped the Blues claim the 2017 Premier League title, the 2018 FA Cup and the 2019 Europa League.

New boss Frank Lampard is ushering in a new Stamford Bridge era, though, and Pedro is among those moving on.

The Chelsea manager took the time to pay tribute to Pedro following the Blues’ final Premier League game of the season, a 2-0 win over Wolves that sealed Champions League qualification.

“The lads have just pretty much serenaded Pedro in the changing room and rightly so because of the career he has had generally, and for this club,” said Lampard, after the Wolves victory.

“It was his last Premier League game, but the impact he has had here is huge.

“I want to say a big thanks to Peds and wish him well as he goes forward.

“He is here for the remainder of games, but a big player of the club leaves and the spirit of the club I saw afterwards was pretty special.”