Pirelli puncture probe detail will be of serious interest to Mercedes 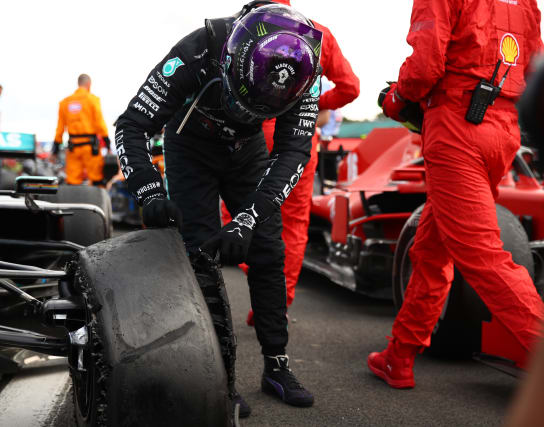 Lewis Hamilton’s Mercedes team are awaiting the outcome of an investigation into the puncture which saw their star driver win the British Grand Prix on three wheels.

Pirelli, Formula One’s sole tyre supplier, have launched a probe into the dramatic failure which happened on the last lap of Sunday’s race at Silverstone.

With this weekend’s 70th Anniversary Grand Prix also taking place at the Northamptonshire circuit, Mercedes are keen for answers – and hope to have the results from Pirelli’s investigation by Tuesday.

Hamilton became the third driver to suffer from a left-front puncture in the latter stages of Sunday’s race, with his Mercedes team-mate Valtteri Bottas and McLaren’s Carlos Sainz also on the wrong end of failures.

It is unclear at this stage whether the punctures were a result of debris on the track – after Kimi Raikkonen’s front wing broke off his Alfa Romeo – or high tyre wear because Hamilton and Co were forced into an early sole stop for rubber following Daniil Kvyat’s high-speed smash with 39 laps remaining.

While Hamilton managed to get his wounded Mercedes over the line, Bottas slipped from second to 11th, allowing Hamilton to extend his championship lead to 30 points after just four rounds.

Hamilton heads into this weekend’s grand prix with three victories from as many races. He is now just four wins shy of Michael Schumacher’s all-time victory tally of 91, and remains firmly on course to match the German’s championship record of seven this year, too.

But speaking after Sunday’s race, the 35-year-old demanded a greater challenge from his rivals.

“I’m a racer at heart, that’s what has always excited me, and that’s what gets me up in the morning,” said Hamilton, who finished ahead of Red Bull’s Max Verstappen and Ferrari driver Charles Leclerc.

“This is not the championship fight I would have hoped for. I’d much, much prefer to be having a super-close battle with Max and Charles because that is what I love.

“I’m still putting in the laps that are required but it’s not a close battle with Max in qualifying and it is the same with Charles. I really, really hope that in future it’s closer.

“Ultimately every team is given the rules and at the end of the day we’ve just done an exceptional job collectively. You can’t fault my team for that.

“You have to look at the people that run the sport to do a better job with the rules so we get closer racing in the future.”