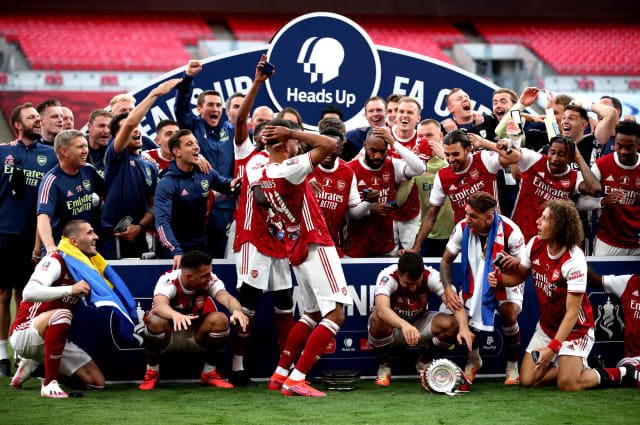 Arsenal captain Pierre-Emerick Aubameyang made just one mistake during the FA Cup final – fortunately for Gunners fans, it came when he was attempting to lift the trophy.

The north London side triumphed 2-1 against Chelsea in a repeat of the 2017 final, with the Gabon striker scoring a penalty in the first half and a sublime solo effort in the second.

Arsenal clung on to claim their 14th FA Cup victory, but Aubameyang was unable to cling on to the trophy after the game.

After struggling to separate the Cup from its base, Arsenal's number 14 decided to bring both to the team before dropping the trophy on the floor to the disbelief of his team-mates.

"The smoothest trophy lift you're ever likely to see? We think so," tweeted Arsenal.

The trophy would normally be presented by experienced gong-giver and FA president, the Duke of Cambridge, but Prince William was unable to attend this year's event.

Instead, he watched on from the Sandringham Estate in Norfolk, where he hosted an outdoor screening of the final to raise the profile of his Heads Up mental health campaign.

"That's why you need the President there!" the duke joked upon watching Aubameyang struggle with the trophy.

Arsenal have now claimed the FA Cup two times more than Manchester United, who have won it on 12 occasions.

"Apparently after you win it 14 times you get to dismantle the trophy," Arsenal fan Gunnerblog joked.

Whoever lifts it next may find a dent or two in the metalwork.

Nick Gubbins removed from Middlesex match due to coronavirus risk