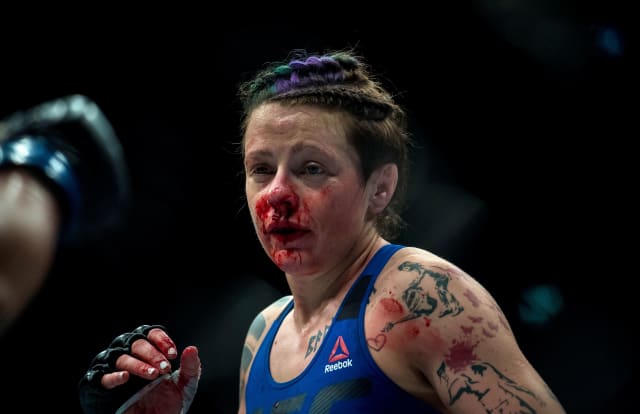 Joanne Calderwood is unfazed about the risk of losing a potential UFC flyweight title shot as she returns to the octagon in Las Vegas this weekend, stepping in as a late replacement to take on Jennifer Maia.

Calderwood was lined up to fight Valentina Shevchenko but the women’s 125lb champion pulled out with a leg injury and has since undergone surgery, seemingly leaving her Kilmarnock opponent in limbo.

Rather than wait around for Shevchenko to recover, Calderwood has taken matters into her own hands. With only two weeks’ notice she has agreed to face Maia, whose original opponent Viviane Araujo tested positive for coronavirus.

“I know I took a risk taking this fight. For me it made sense and I know I’ll be ready,” Calderwood said.

“I’m at the point of my career where I train consistently, my weight is good, my mindset is good, and if the ball’s in your court then why not?

“I feel like I’ve got nothing to lose because I have been training and staying up with my nutrition. I’m ready to go.”

Even if her gamble pays off, Calderwood, whose last mixed martial outing saw her collect her 14th win in 18 contests when she outpointed Andrea Lee last September, is not automatically guaranteed to face Shevchenko.

But by grasping the nettle against a Brazilian opponent with an MMA record of 17-5, Calderwood hopes to prove to her employers and followers of the sport that she is an elite level competitor.

“It’s coming up to a year since the last time I fought, I miss all the emotions. You can feel alienated because you haven’t done it in so long,” the Las Vegas-based Calderwood added.

“I feel like I’ve made a good decision because I don’t want to be going in against the best girl in the division feeling rusty. That octagon time is very important.

“There’s flyweights out there who are on to their second and third fights now and I’ve been out for a year.

“I’m in a great position and have a great opportunity ahead of me but at the same time I’m not getting paid and people aren’t thinking I’m relevant to the sport, so I want to go out there and prove myself to the fans.”

The UFC is back at the APEX in Nevada after three weeks and four ‘Fight Island’ events at Abu Dhabi, a concept designed by company president Dana White to allow fighters based outside the United States to compete.