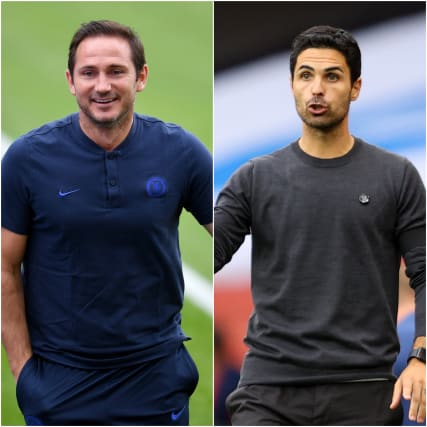 Both are managed by former players, Frank Lampard in charge of the Blues and former Arsenal skipper Mikel Arteta now in the dugout for the Gunners.

Here, the PA news agency compares the two bosses as they look to win their maiden trophy in management at Wembley.

Both midfielders enjoyed fine careers on the pitch, Lampard becoming Chelsea’s all-time leading goalscorer during a 13-year stay at Stamford Bridge where he also won four FA Cups, three Premier League titles, the Champions League and the Europa League. Arteta spent less time at Arsenal but became captain during a five-year stint which, despite seeing him pick up injuries, also led to two FA Cup wins.

Lampard was appointed last summer despite former Chelsea boss Maurizio Sarri landing the Europa League – with a 4-1 win over Arsenal in the final – and took over a club under a transfer embargo. He guided the Blues to a top-four finish and has his sights set on FA Cup glory. Meanwhile, Arteta replaced Unai Emery at the Emirates Stadium in December and has seen an improvement in performances and morale, while results have still not been completely satisfactory – Arsenal finished eighth in the Premier League and crashed out of the Europa League at the round of 32 stage.

Both Premier League fixtures this season were played with Lampard and Arteta in their respective dugouts. Chelsea’s 2-1 win at Arsenal meant Arteta’s first home game at the helm ended in defeat, with Pierre-Emerick Aubameyang’s goal cancelled out late on as two errors at the back saw Lampard’s men turn the tide. The meeting at Stamford Bridge was very different and showed the improvement under Arteta as Arsenal, down to 10 men following David Luiz’s red card, twice came from behind to draw 2-2.

While playing behind closed doors due to the coronavirus pandemic, it has been possible to hear Arteta constantly barking out instructions to his players. He has also shown his multilingual tongue, happily flitting between English, Spanish and French to communicate his messages as clearly as possible. Lampard is generally more of a touchline stalker, not shouting out his directions, more living the moment as a player would – although his recent spat with Liverpool boss Jurgen Klopp and his bench shows he can hold his own in an exchange of words.