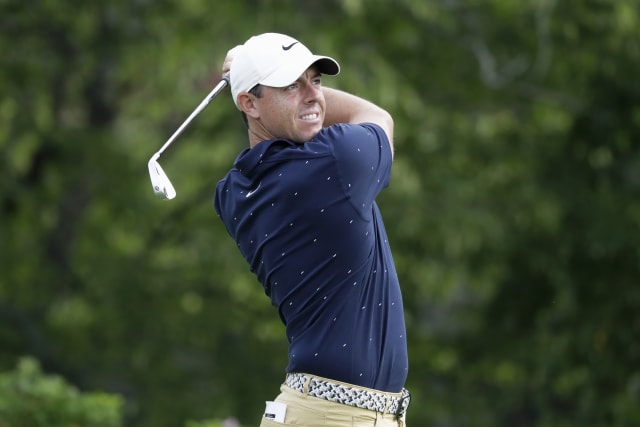 McIlroy, needing a win to regain the world number one spot from Jon Rahm, found water at the short 11th after starting his round at TPC Southwind at the 10th.

The Northern Irishman prevented a double bogey getting on his card with a 20-foot putt, but he soon dropped another shot at the par-three 14th.

McIlroy found the green this time, but three-putted to drop to two over-par and his round failed to spark as he reached the turn in 37.

Rahm had an inconsistent start after his victory at the Memorial Tournament two weeks ago had taken him to the top of the world rankings.

The Spaniard chipped in from a greenside bunker at the par-four 15th to move to one-under but dropped back to level-par following a wayward drive at the 17th.

Bryson DeChambeau, winner of the Rocket Mortgage Classic earlier this month, has been the form player since the PGA Tour restarted in June after the coronavirus lockdown.

DeChambeau was in full flow again with birdies at the 12th and 13th and an eagle at the 16th to lead at four under-par.

Reigning champion Brooks Koepka has been out of sorts with just one top-10 finish since the end of August last year.

But the four-time major champion opened with four birdies and fellow Americans Chaz Reavie, who went out in 31, and Brendon Todd, as well as
South Korea’s Kang Sung-hoon, joined DeChambeau at the top of the leaderboard.

Rickie Fowler, Matt Kuchar and England’s Danny Willett were a shot further back, while Ireland’s Shane Lowry was in a group on one under-par.

English pair Tommy Fleetwood and Paul Casey both reached the turn at level-par, Matt Wallace was one-over after seven, and Matthew Fitzpatrick two-over after eight.