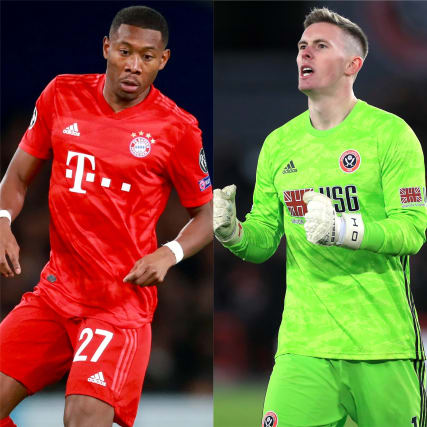 Manchester City’s hopes of signing David Alaba hinge on Bayern Munich offering him a more attractive package to stay at the German club, according to Bild. City and Paris St Germain have expressed interest in the 28-year-old left-back. Alaba’s agent is asking Bayern to boost his contract, which expires next year, to £18million a season.

Manchester United’s efforts to keep goalkeeper Dean Henderson will face their biggest test over the next fortnight, Sky Sports reports. Henderson has shone on loan at Sheffield United, while David De Gea has struggled at times for Ole Gunnar Solskjaer’s side. A host of clubs are circling to try to make Henderson their first-choice keeper, but United are set to offer the 23-year-old new terms and let him battle it out with De Gea for the number one jersey next season.

Luis Suarez could be the first big-name signing for David Beckham’s Inter Miami, according to Spain’s Mundo Deportivo. The 33-year-old ex-Liverpool striker is still contracted to Barcelona until next year, but Beckham is said to be eager to sign the Uruguayan for his potential appeal to Miami’s large Hispanic population.

Arsenal will have to try again in their bid to sign Thomas Partey from Atletico Madrid, Spanish website AS reports. The Gunners have reportedly offered £22.6million plus 21-year-old France midfielder Matteo Guendouzi for the defensive midfielder. Atletico claim this is still not enough to secure the Ghanaian.

Tottenham are eager to sign Colombian midfielder Luis Diaz from Porto, Portuguese outlet Record says. The 23-year-old winger has earned praise from Spurs boss and former Porto manager Jose Mourinho, who is looking to bolster his attacking ranks after qualifying for the Europa League next season.

Ryan Manning: The 24-year-old Queens Park Rangers full-back could be on his way to West Ham, according to The Daily Telegraph.

Joe Hart: The 33-year-old, now a free agent after his Burnley contract expired, is close to signing for Celtic, The Sun reports.