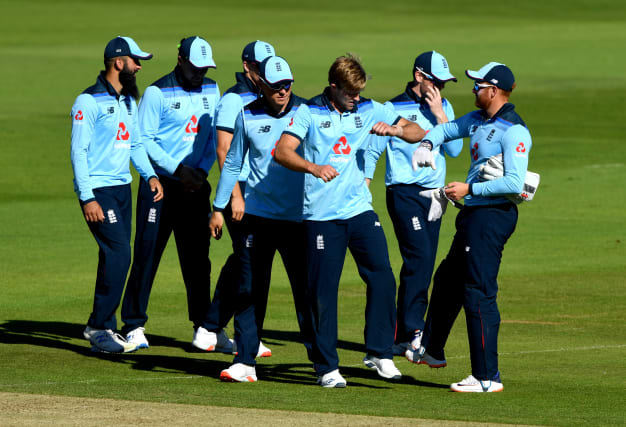 David Willey celebrated his England return with five for 30 as Ireland were all out for 172 in 44.4 overs, the tourists spared from embarrassment by debutant Curtis Campher’s unbeaten fifty in the Royal London series opener.

Willey was the unfortunate bowler to accommodate Jofra Archer in England’s World Cup squad, but the Yorkshire left-armer claimed a maiden five-for at international level on his comeback in front of empty seats at the Ageas Bowl.

In England’s first home one-day international since being crowned world champions, Willey bowled with plenty of guile and was chiefly responsible for Ireland teetering to 28 for five in the seventh over.

Campher, a South African-born all-rounder who qualifies for Ireland through his mother’s passport, showed admirable fortitude on his first international outing, surviving a hat-trick ball before going on to share stands of 51 and 66 with Kevin O’Brien and Andy McBrine.

Just four boundaries came from Campher’s bat, the 21-year-old running hard between the wickets, but his 59 not out ensured England are not certain of a routine chase in this match, which marks the start of the ICC Cricket World Cup Super League, part of the qualification process for the 2023 World Cup.

Joe Denly was a late withdrawal due to a lower back injury, with Kent team-mate Sam Billings filling in, while spin bowling all-rounder Liam Dawson and left-arm seamer Reece Topley were the others to miss out among England’s squad.

Ireland left out veteran pair William Porterfield and Boyd Rankin, while including Campher and handing Harry Tector his ODI debut, and they were asked to bat first under gloriously sunny skies.

The players on both sides took a knee in support of Black Lives Matter – as was the case during England’s Test series against the West Indies – before Willey made inroads into the batting line-up with just his fourth delivery.

A fuller ball with a hint of in-swing was clipped to short midwicket by Paul Stirling, with Andrew Balbirnie departing in Willey’s next over, the Ireland captain’s wild slash taking a faint nick en route to the wicketkeeper.

Saqib Mahmood touched 89 miles per hour and got plenty of bounce from the surface, and he got in the wickets column when Tector was cramped for room and inside edged on to his stumps.

It got even better for Willey when Gareth Delany sliced to backward point to end a counter-attacking 22 while Lorcan Tucker departed next ball, lbw after a review showed the delivery would have crashed into leg stump.

O’Brien and Campher understandably eschewed any risk as they looked to rebuild but the former’s patience ran out as he clubbed Adil Rashid to Willey in the deep while Simi Singh was short of his ground after being sent back after setting off for a quick single.

McBrine initially matched Campher’s willingness to dig in before taking the attack to Tom Curran, who had his revenge when the lower-order batsman holed out after making 40 from 48 balls before Willey fittingly ended Ireland’s innings by snaring Craig Young, who toe-ended to mid-off.