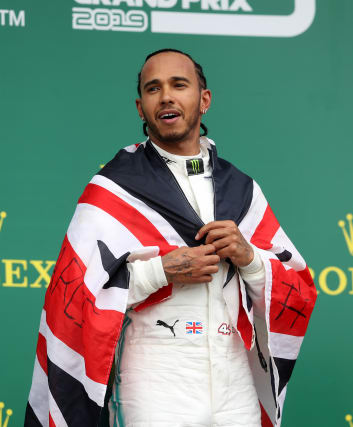 Lewis Hamilton will look to extend his record of British Grand Prix wins to seven when the Formula One roadshow arrives at Silverstone this weekend for the first of back-to-back races.

Success in England last year saw six-time world champion Hamilton move clear of fellow Brit Jim Clark and Frenchman Alain Prost in the list of British Grand Prix victories and out in front on his own.

Ahead of the Mercedes driver attempting to secure a seventh Silverstone win, the PA news agency takes a look at his previous six triumphs at the Northamptonshire circuit.

Hamilton headed to his home race fourth in the drivers’ standings and also qualified in that position, but stormed into second going into the first corner before he passed Kimi Raikkonen on lap five. In torrential rain Hamilton never looked back, finishing almost 70 seconds ahead of second-placed Nick Heidfeld and lapped the entire pack up to third for his maiden British Grand Prix victory. Hamilton still ranks this triumph as one of his finest.

Hamilton ended a six-year wait for another Silverstone win but only after a dramatic start to proceedings. The race was suspended for over an hour after a section of the guardrail barrier needed repairing and Nico Rosberg led for 18 laps after the restart before the Briton took over when his Mercedes team-mate made a pit stop. Rosberg would go back ahead, but when his gearbox expired it paved the way for Hamilton to take the chequered flag much to the delight of the home crowd.

A thrilling battle ensued to decide the winner of the 70th British Grand Prix, with Hamilton failing to make the most of pole before he fought back to make it successive victories at Silverstone. Felipe Massa and Valtteri Bottas stole a march on the Mercedes driver but Hamilton opted for the undercut in lap 20 and it paid off. With rain set to arrive during the latter stages of the race, the world champion went for intermediate tyres and it ensured he won by over 10 seconds ahead of team-mate Rosberg.

It was more straightforward for Hamilton at the venue this time, but the race started with a safety car. He was able to convert a pole position into a strong lead over his rivals and, despite chaos at times around him, the homegrown star kept his cool and was able to pick up the pace late on to ensure he crossed the line clear of championship challenger Rosberg, who was booed on the podium – a gesture Hamilton later criticised.

Hamilton broke records at his 11th British Grand Prix and achieved a grand slam, with a pole position turned into a victory where the Englishman led every lap of the race, set the fastest lap and eventually clinched a fourth successive Silverstone win 14 seconds ahead of Bottas, who was now part of the Mercedes team. It was a fifth triumph overall for Hamilton at the race, which tied him with Clark and Prost on the most British Grand Prix wins.

After team-mate Bottas took pole, the lead exchanged hands between the Mercedes pair before the Finnish driver emerged behind Hamilton after he pitted at the end of lap 16. An incident three laps later saw the safety car required and Hamilton used it for an advantageous pit stop which allowed him to maintain a lead over Bottas. He would get home by a victory margin of 24 seconds in the end, with the Brit setting a new lap record of 1:27.369 on a day where he moved out alone as the driver with most victories in the race.