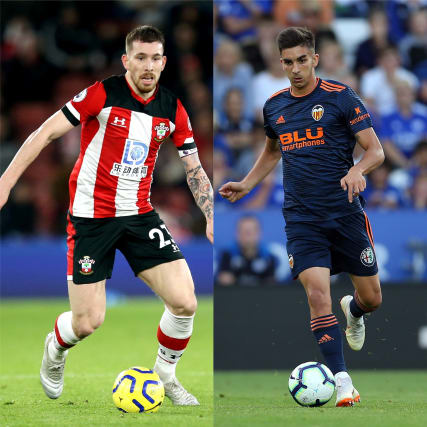 Manchester City have made Valencia winger Ferran Torres their top transfer target of the summer, ESPN reports. Valencia are resigned to losing the star 20-year-old, who has caught the eye of several leading clubs in Europe this season. The Spain under-21 representative, valued at around £40million, is said to be keen on a move to the Etihad Stadium.

Tottenham are drawing closer to signing Denmark midfielder Pierre-Emile Hojbjerg from Southampton, according to Sky Sports. The Saints value the 24-year-old at £25m. Spurs are offering only £15m, but are discussing making right-back Kyle Walker-Peters’ loan spell with the Saints a permanent as part of the deal. Everton have also shown interest in Hojbjerg, but he has expressed a preference for Spurs.

West Ham are keen to sign forward Eberechi Eze from QPR, The Guardian reports. The 22-year-old has garnered attention with 14 goals for the West London club this season, with Aston Villa, Crystal Palace, Newcastle and West Brom all said to be interested. West Ham aRE believed to be ready to make a concerted bid for Eze, with Hammers manager David Moyes eager to bolster his forward stocks.

Tottenham defender Juan Foyth could be on his way to Leeds. The Sun reports Marcelo Bielsa believes his fellow Argentinian could be what he needs to strengthen his defence in the club’s first season back in the top flight, and is preparing a £15m bid. The 22-year-old Foyth is said to be looking for a move away after falling out of favour under Jose Mourinho at Spurs.

Everton are moving to sign Serbian defender Branislav Ivanovic, who is a free agent after the expiration of his contract with Zenit Saint Petersburg, Serbia’s Vecernjih Novosti reports. The 36-year-old played under Toffees boss Carlo Ancelotti at Chelsea before moving to Russia, and now Ancelotti sees him as an ideal boost to his defences for next season.

Oliver Skipp: The Tottenham 19-year-old midfielder could be on his way to Fulham on a season-long loan, the Evening Standard reports.

David Silva: The 34-year-old looks like heading to Lazio having left Manchester City, according to AS.