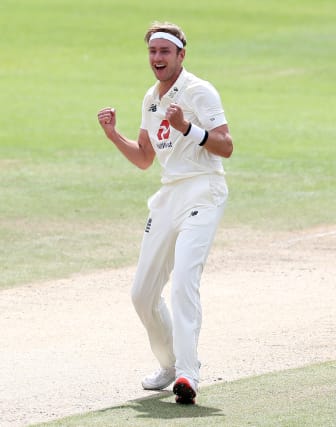 Stuart Broad was hailed as “incredible” and “box office” after collecting his 500th Test wicket by Eoin Morgan, who believes his former England team-mate can remain a pivotal performer in the 2021-22 Ashes and beyond.

Broad was left out of the #raisethebat series opener against the West Indies at the Ageas Bowl but responded by taking 16 wickets at 10.93 in the last two Tests at Emirates Old Trafford.

As well as re-establishing his credentials and being a shining light in a 2-1 series win, Broad joined long-term opening bowling partner James Anderson in the exclusive 500 club on the final day of the third Test.

Morgan, watching on from Southampton ahead of the start of the one-day series against Ireland on Thursday, thinks only when the duo have retired will they get the recognition their efforts deserve.

England’s limited-overs captain said: “It’s incredible. We watched most of it yesterday. We sat back and discussed where it started, how it has progressed and it’s been unbelievable.

“In many ways Broady and Jimmy are always paired together but when you speak about them on their own they are the greatest that there’s ever been.

“That doesn’t hold a lot of weight at the moment but I’m sure it will hold a lot more weight when they finish playing which is sad but it’s just the way everybody operates.

“I’m very lucky to have played Test cricket with Broady. I played in a game where he took a hat-trick at Trent Bridge (against India in 2011) and it was unbelievable.

“To show the longevity and the skill but not only that he’s box office: he takes wickets in clusters which means he’s a nightmare to play against. It’s incredible what he has achieved.”

Neither Anderson nor Broad have played a limited-overs international since February 2016, leading some to speculate the pair blooming in the autumn of their careers has been helped by a reduced workload.

Morgan said: “You’d have to speak to them, because they know their bodies and how they feel.

“But I know for me it has definitely prolonged the way I see my career going, having cut red-ball cricket out and allowed me to focus primarily on one thing going forward.

“It means it’s less clustered and you can spend more time with your family, and cricket is not as overwhelming as it potentially could be towards the end of your career.”

Both Broad and Anderson have set their sights on England’s next trip Down Under in 18 months’ time, when they will be 35 and 39 respectively.

Asked whether they can go on for some time yet, Morgan added: “Hopefully they can but you don’t know until you come up against your biggest test.

“Everybody who plays Test cricket, English cricket, I suppose is judged on Ashes series performances and those guys being who they are, it wouldn’t surprise if they wanted to continue on past that.”