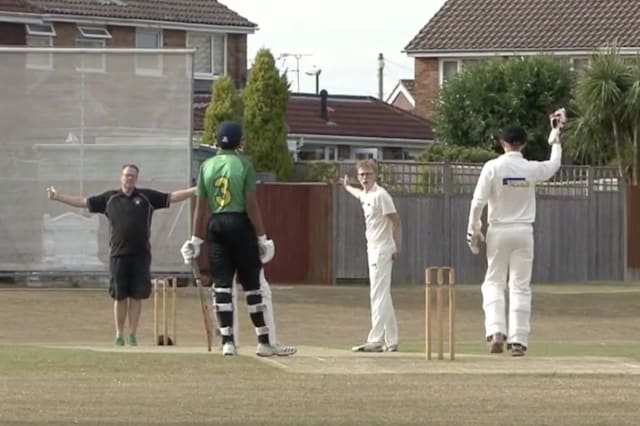 Story and video from Newsflare

This cricket umpire has a nightmare after changing his decision four times in just a few seconds.

During the amateur game between Roffey Cricket Club and Three Bridges Cricket Club in West Susex, the batsman apparently nicks the ball and the Roffey wicketkeeper catches it but the umpire rules it to be a wide ball at first, by raising both arms at shoulder height.

After strong appeals from the Roffey players, the umpire then proceeds to raise his finger and give the wicket before quickly changing his decision to a dead ball - which he signals with arms outstretched in front with hands below their waist and then crossing and uncrossing his arms, and then finally back to a wide ball.

The batsman remained at the crease and continued his innings.

Several spectators can be heard expressing their disbelief at the umpire's shaky decision-making.

One is heard saying: "You can't do that! You cannot do that."

Mike Rose, who filmed this clip, told Newsflare: "We all couldn't believe that the umpire did that! The batsman was so confused, he didn't know whether to walk off or not! We all saw the funny side of it in the end both the players and spectators."

Rose added: "It was in like the second over of the game! Three Bridges went on to win the match!"