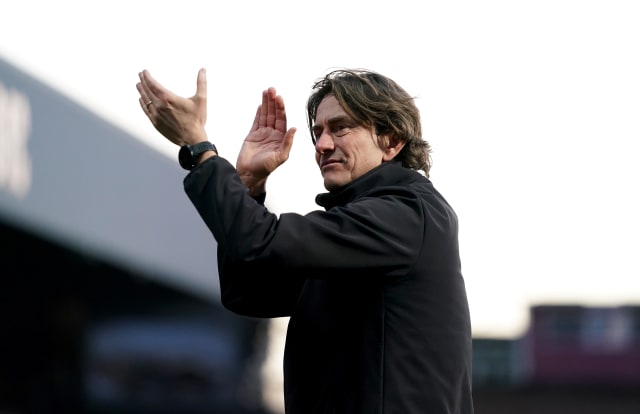 Head coach Thomas Frank has promised Brentford will do everything in their power to produce one last magical moment at Griffin Park when Swansea visit on Wednesday night.

The Welsh club travel to the capital with a slender advantage following a 1-0 win in Sunday’s Sky Bet Championship play-off semi-final first leg.

If there was not enough riding on the tie already, the Bees will also bid farewell to their home of the last 116 years.

After losing at Griffin Park to Barnsley last Wednesday, Frank is confident they will sign off with a victory that will take them to Wembley.

“This is one of these defining games and moments,” he said. “We are not nervous. We know we need to attack.

“I feel inside my body how my emotions are and when I speak to the players and I speak to the staff we are in total combat mode and we are so ready to play and we will come out flying.

“We will do everything we can to make it a last magical moment at Griffin Park that can stay with the fans forever.

“I promise them when we are done tomorrow, I know I will personally carry my players off the pitch because they can’t do that themselves.”

Although Brentford will have to play one last time at Griffin Park without any supporters, they received a boost on Tuesday with confirmation left-back Rico Henry can play.

He was sent off during the 1-0 defeat at the Liberty Stadium for a challenge on Connor Roberts, but the Bees’ appeal has been successfully overturned.

Post-match Frank called for the video assistant referee to be introduced for next season’s play-offs, and while he will not dwell on the decision to show a red card to Henry, he is hopeful it sparks change.

“The past is the past, we can’t do anything about that,” the 46-year-old added.

“I very rarely criticise referee decisions and there has been plenty to criticise over the 18 months I’ve been here. It is football and there can be human errors.

“The reason I reacted fairly firmly is because I think there is something we can change for the future for these semi-finals with so much at stake.”

Brentford’s defeat in Wales was their third in a row, but Frank is happy with their performance levels.

After missing the chance to win automatic promotion with the loss to Barnsley, the Dane hopes lady luck is on their side.

Frank added: “If the big football God gives us a little bit, that he hasn’t given us in the last three games, I am 100 per cent sure we are going to win.”