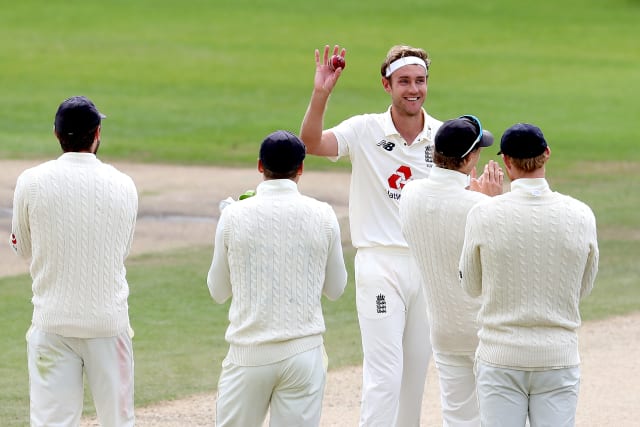 Stuart Broad secured his place among the pantheon of Test pacemen, claiming his 500th wicket as England moved towards a series victory on the final morning against the West Indies.

Since striking twice with the new ball on Sunday evening Broad had spent two nights stuck on 499, but finally brought an end to his wait when he pinned Kraigg Brathwaite lbw.

It was as plumb as any decision he has earned over the course of 13 years and 140 appearances in England whites, with no sign of a DRS review to delay his celebrations any longer.

Just six other players have ever achieved the milestone, including Broad’s long-time partner James Anderson, and having shared so much together they now have the same 500th victim.

In a quirk of fate, it had been Brathwaite who saw Anderson become the first Englishman in that elite club three years ago at Lord’s.

Broad’s personal milestone also helped England strengthen their stranglehold on the third Test, leaving the tourists 84 for five and 315 runs adrift when lunch was called.

Brathwaite and Shai Hope had started the morning in determined fashion, batting positively to add 25 runs in a 25-minute mini-session before the first shower of the day.

The players were only off the field for a brief time and when Broad resumed the hunt he continued attacking the stumps at a full length, risking runs but increasing his chances of success.

It came with the third ball of his fourth over, Brathwaite getting into a tangle to one that kept a touch low, thudded his back leg and would have taken care of middle stump.

The batsman accepted his inevitable fate, allowing Broad’s team-mates to converge and share his big moment.

He eventually took the chance to hold the ball aloft, albeit in slightly poignant fashion given the empty stands that have allowed this bio-secure series to take place.

Even when his spell was finished he found a way to stay involved, running in from mid-on to take the catch for Chris Woakes when Hope gave away his good start with a horrible hack off the toe end.

The mixed weather offered some optimism for the West Indies but they lacked the fortitude to take advantage.

Shamarh Brooks was next to follow the pattern, progressing nicely to 22 only for Woakes to shade one in off the pitch and brush the inside edge of an ambitious stroke.

Another shower forced the players to take an early lunch, but there was still a long road ahead if the Windies were to claim the draw they need to retain the Wisden Trophy.