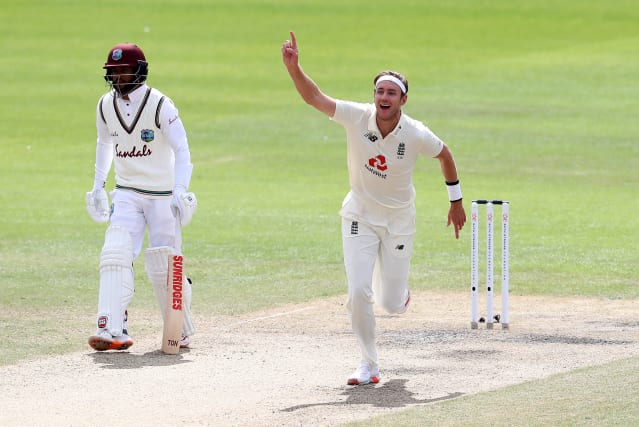 Stuart Broad secured his place among the pantheon of great pace bowlers with a 500th Test wicket before a brilliant five-for from Chris Woakes powered England to a 2-1 series win over the West Indies.

Broad had spent two successive nights lingering on 499 but ensured his wait would not carry on beyond this third Test, pinning Kraigg Brathwaite lbw in the morning session for his landmark scalp then returning to put the finishing touch on a 269-run victory.

As well as making him just the seventh bowler in history to reach the remarkable landmark – and the trajectory of the sport gives every reason to believe he might also be the last – Broad’s first-innings 62 and match figures of 10 for 67 ensured it would be England who won the last ever tussle for the soon-to-be-retired Wisden Trophy.

The 34-year-old enjoyed his moment, 13 years and 140 caps in the making, though the eerie silence of a ‘bio-secured’ Emirates Old Trafford was hardly befitting of a feat as lofty as this one.

The empty stands will not concern Broad, though, and he should rightly cherish his elevation to an elite group of a seamers that includes his long-time partner James Anderson, Courtney Walsh and Glenn McGrath as its only previous members.

It is no spoiler to reveal that Woakes will not be joining their number, standing as he does on 106 wickets from 35 appearances, but he remains one of the most skilful operators around. He shouldered the responsibility of driving forward the England cause, taking five for 50 in a long unbroken shift that saw the tourists rolled for 129 all out.

With one wicket still needed Broad returned for one last effort and did the job with his first ball, Jermaine Blackwood flapping down leg side.