Leeds and Huddersfield rule out raiding Toronto Wolfpack for players 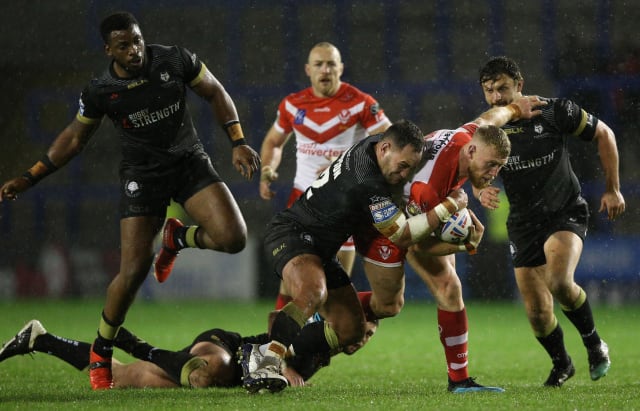 Leeds and Huddersfield have stressed they will not be looking to sign Toronto Wolfpack players following the Canadian outfit’s withdrawal from Super League for the rest of the season.

The Wolfpack, who had been due to face Hull KR this weekend when the league resumes, announced last week that they would not be participating in the remainder of the campaign, citing “overwhelming financial challenges” presented by the coronavirus pandemic.

Their record for the season has subsequently been expunged ahead of the restart on Sunday, which sees a double-header at Headingley of St Helens against Catalans Dragons and then Leeds against Huddersfield.

When asked on Tuesday about the Toronto situation and the possibility of signing their players, Leeds coach Richard Agar said: “It is a difficult one at this moment in time going into the market because such has been the financial impact on the game, there is a fair bit of unknown for each and every club.

“It’s a shortened season and with 15 games it’s probably not something that we’re going to look to do in the short term, certainly not around the Toronto guys.

“I don’t know enough about the ins and the outs of it (Toronto’s withdrawal), but I guess from my own personal view, not knowing the details, the timing of it has been a very, very difficult one for the competition and it has probably thrown up a lot more questions than answers at this moment in time.

“Will they come back? I’m guessing that remains to be seen. I think all the noises are that they are going to try to get back for next season, but I’d suggest there is a fair bit to play out in that story just yet.”

Huddersfield coach Simon Woolford said: “It (the situation) is disappointing. It’s a real hard one to get your head around really.

“As far as signing any of their players, we won’t be going into the market.

“Like every other club, we’ve gone through a difficult period. Players have taken pay cuts that they will remain on for the rest of the year, so I don’t think it would be fair or a good look on our behalf, going into the market to boost our squad for this year.

“We’re relatively happy with our squad, we’ve got most of them fit and available for selection, so I don’t think there’s any need for us to go into the market this year, so we’ll go with what we’ve got.”

Leeds are currently fourth in the Super League table after four games while Huddersfield are third having played five matches.