5 of the best British Grands Prix at Silverstone 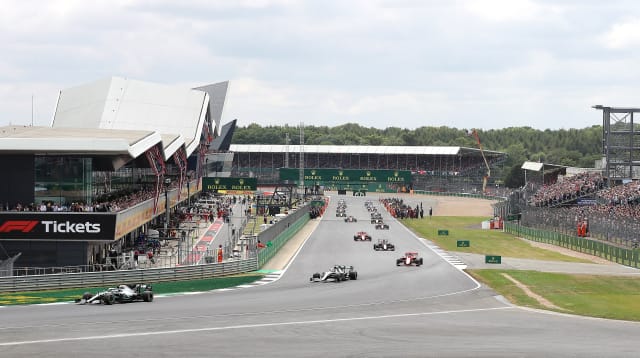 Silverstone hosts the first of two back-to-back races this weekend as this rather makeshift Formula One calendar begins a second triple-header of races over consecutive weekends.

This Sunday’s race is designated as the British Grand Prix, while teams will reconvene a week later for the Formula One 70th Anniversary Grand Prix, commemorating Silverstone hosting the first world championship Grand Prix back in 1950.

Ahead of Sunday’s race, the PA news agency looks back at five of the best grands prix at Silverstone.

Nigel Mansell was forced to pit for a new set of tyres after reporting vibrations on his Williams. With 30 laps remaining he was the best part of half a minute behind his team-mate and fierce rival Nelson Piquet. The chase appeared impossible but, spurred on by his home crowd, Mansell smashed the lap record on nine occasions before catching and passing Piquet after an exquisite move at Stowe with only two laps left. The home crowd were euphoric and Mansell responded by leaping out of his Williams and kissing the tarmac.

Michael Schumacher illegally overtook pole-sitter Damon Hill on the parade lap and was ordered to serve a stop-and-go penalty. A black flag was issued which should have resulted in Schumacher’s instant disqualification. But the German kept going and eventually opted to pull into the pits on lap 27 to serve his earlier stop-and-go punishment. Hill went on to claim a crucial victory and was presented with the winner’s trophy by Princess Diana. Schumacher finished second, but he was later disqualified for ignoring the black flag and subsequently handed a two-race ban.

Schumacher was at the centre of controversy again four years later after winning the race while stationary in the pit-lane. Mika Hakkinen had led from the start, but as the rain fell and conditions deteriorated, the Finn lost control of his McLaren and spun. The safety car was deployed, and while Hakkinen remained in the race, he had sustained damage to his front wing. His 40-second lead was wiped out and Schumacher looked odds-on to win. The German, however, had illegally passed Alexander Wurz under a yellow flag, which should have resulted in a stop-and-go penalty. But the haphazard stewards only announced his punishment with two laps left. Schumacher entered the pits to serve his penalty, but had already crossed the start-finish line and won the race. The bizarre result stood despite McLaren’s protests.

Rubens Barrichello claimed the greatest victory of his career in an all-time F1 classic. The Ferrari driver started from pole but slipped to eighth after a safety car was deployed when a protester stormed the track along the 200mph Hangar Straight. But Barrichello carved his way back through the field before executing a wonderful move on McLaren’s Kimi Raikkonen on lap 42 to claim the lead, and ultimately, the race victory.

Lewis Hamilton arrived at his home race fourth in the drivers’ standings but left on top after storming to victory in one of his outstanding performances. In torrential rain, Hamilton blitzed the field, finishing the race almost 70 seconds ahead of second-placed Nick Heidfeld and lapped the entire pack up to third.