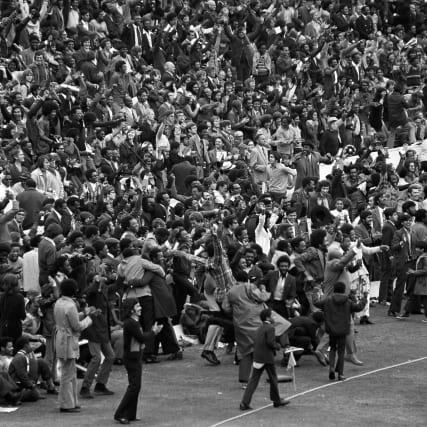 West Indies supporters celebrated wildly at the Oval after England lost three wickets for no runs on this day in 1973.

Sir Garry Sobers claimed the first of the three, trapping England captain Ray Illingworth lbw to leave the hosts on 247 for six in the first innings.

Keith Boyce took over, having Tony Greig caught by Sobers soon after, before sparking further delight in the stands by dismissing John Snow for a duck to claim the fourth of his five first-innings wickets.

The tourists restricted England to just 10 more runs before setting a mammoth target of 414 for victory.

The Windies, whose opening score of 415 after electing to bat owed a lot to a superb knock of 132 from Sir Clive Lloyd, went on to win by 158 runs and take a 1-0 lead in the three-match series.

An unbeaten 106 from Frank Hayes helped the hosts’ cause but they fell well short and went on to lose the series 2-0.