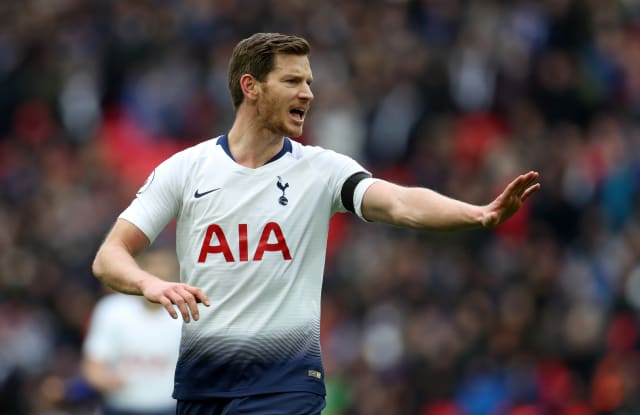 Jan Vertonghen has announced his departure from Tottenham, ending eight successful years at the club.

The Belgium defender, whose contract was extended in June until the end of the current season, has not been offered a new long-term deal and will now leave the club where he made over 300 appearances and was one of the most reliable centre-backs in the Premier League.

Vertonghen tweeted: “So my time at the club comes to an end. A sad day for many reasons.

“I will miss the friends I’ve made here, the staff that make the club run, playing at the amazing new stadium & of course you fans.

“Thank you for all the support over the years. You’ve been amazing. We had many unbelievable memories but for now, it’s goodbye.”

Goalkeeper Michel Vorm is also departing at the end of his one-year contract.

Spurs’ players paid tribute to the pair on social media after the 1-1 draw at Crystal Palace on Sunday which booked their place in next season’s Europa League.

Harry Kane said on Instagram: “Wish nothing but the best for @jvertonghen and @mvorm with whatever is next for them. Been a pleasure sharing a dressing room and playing with them both.”

Vertonghen’s Belgium team-mate Toby Alderweireld said: “Sad to see these two amazing guys leaving the club, both great players but even better persons. We shared countless moments that I’ll never forget. Wishing you all the best for your next steps. Keep in touch.”

Boss Jose Mourinho has been quizzed on Vertonghen’s future over the last few weeks, but chose not to comment out of respect for the 33-year-old.

He said on Friday: “I think [he’s been] eight years in the club and for me eight months, something like that, it’s for Jan to be the man to speak about his future. Not for me.”

Vertonghen, who also hinted at his exit on social media without posting anything concrete, joined Spurs in 2012 from Ajax and has been an integral part of the side, proving a key player in the successive Premier League title challenges and run to the Champions League final last season.

But he has fallen out of favour this season, first under Mauricio Pochettino as his contract issue rumbled on throughout the summer transfer window, while also playing a minimal role under Mourinho.

He was open to the possibility of staying in north London, but his future now lies elsewhere and he has previously spoken about the desire to move to a new country and play in the Champions League, with Spain and Italy possible destinations.