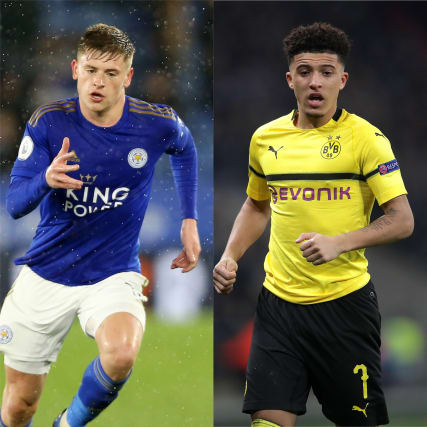 Premier League champions Liverpool are eyeing Leicester winger Harvey Barnes, according to the Daily Mirror. Barnes, 22, has impressed for the Foxes this season. However, the paper says that Leicester will not be letting Barnes go cheaply.

Doubts have clouded Manchester United’s efforts to sign Jadon Sancho, according to The Times. Sancho, 20, is said to have agreed personal terms with United, but uncertainty surrounds the club’s budget for buying the winger. Borussia Dortmund are said to be holding out for at least £90million. Still, the German club are reportedly moving to buy Lille and France attacking midfielder Jonathan Ikone, 22, as a replacement for Sancho.

Newly-promoted Leeds are lining up one of their first transfers ahead of their return to the Premier League, with 20-year-old Canadian forward Jonathan David in their sights. David has shone at Belgian club Gent this season to attract interest from Leeds head coach Marcelo Bielsa. Leeds will face stiff competition, however, with Manchester United also having been linked to the £27million-rated player.

Leeds look set to miss out, however, on veteran Uruguay striker Edinson Cavini, the Daily Express reports. The 33-year-old had been linked to the club in light of his move away from Paris St Germain, but has reportedly settled on a switch to Benfica instead, according to Portugal’s Todo Fichajes.

Liverpool are also keen on Schalke centre-back Ozan Kabak, according to the Daily Mail. The 20-year-old Turkey international is rated around the £40million mark, but Schalke could sell him for less due to financial difficulties. The Reds will likely have rivals for his signature, with Manchester City, Juventus and Borussia Dortmund having been linked to Kabak in the past.

Albian Ajeti: The 23-year-old West Ham and Switzerland striker is a target for Celtic, the Daily Record says.

Ousmane Dembele: The 23-year-old French winger could be a target for Manchester United after falling out of favour at Barcelona, The Times reports.