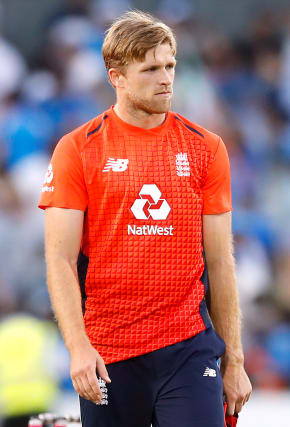 David Willey is viewing an unexpected second chance with England as “a free hit” after being recalled to the one-day squad for the first time since his gut-wrenching omission from last year’s World Cup.

Willey had been involved for the duration of the four-year build-up to the tournament and even made it as far as the provisional 15-man squad before being cut for the newly available Jofra Archer.

While England, and Archer, went on to lift the trophy in an unforgettable final at Lord’s, the Yorkshire all-rounder started coming to terms with the idea that his international career might be at an end and set himself on a less complicated goal: having fun with the game again.

He has now been named in a squad of 14 for the forthcoming ODI series against Ireland – England’s first on home soil since they lifted the trophy.

“I’d love to have played in the World Cup for England and I don’t think anything is going to make up for being dropped at the 11th hour, but that’s the nature of the beast,” he told the PA news agency. “Somebody had to miss out and it was me.

“By the end of things last year I was looking over my shoulder all the time, wondering if I’d get picked and allowing myself to be consumed by that. The lesson I learned was to focus on enjoying myself again and concentrate on what I’m doing, not chasing it.

“If I’d have gone down swinging after that selection I might have upset a few people and they might have gone in a different direction now, but I wanted the lads to do well. Just because I missed out I wasn’t going to rubbish it, I’d been part of the group for years.

“Now I have a second chance and it almost feels like a free hit for me. I have no great expectations about being back involved; it goes well, that’s great, but if it doesn’t then I’ll enjoy it while it lasts.

“I feel in a good place now. I wasn’t sure if I’d ever be back in this position and whenever you get the chance to unwrap an England shirt with your name on it, whether it’s the first time or the 100th time, is special. It’s what you dream of doing as a kid.”

Willey is thinking in the short term for the time being but, with the postponed Twenty20 World Cup set to take place next year, he now has the chance to make his case.

“It would be lovely to play in a tournament again – I was in the 2016 final where we lost in the last over so between that and 2019 I haven’t had great success with World Cups,” he said.

“It would be a pretty special thing for me to stay in the fold and get there. But it’s not going to be the be all and end all for me, I’ve learned to concentrate on what I’m doing now and try to cut out the noise.”

Willey is joined in the squad by another returning left-armer, Surrey’s Reece Topley earning a recall more than four years since winning the last of his 10 caps.

He has since endured horrendous injury problems including multiple stress fractures and surgery when he was on the verge of an England call-up in 2018.

Somerset’s explosive batsman Tom Banton has also made the cut but there is no place for Sussex prospect Phil Salt despite a 58-ball century for England Lions against Ireland on Sunday, or the highly rated Sam Hain. Pace pair Tom Helm and Henry Brookes must also wait for their chances despite impressing with three wickets apiece in that warm-up outing.

Joe Denly, who was dropped from the Test side after the series opener against the West Indies, moves across to the white-ball bubble, as does Saqib Mahmood who had been a reserve seamer in the Test group.

Richard Gleeson, Lewis Gregory and Liam Livingstone will stay with the squad as reserve players.