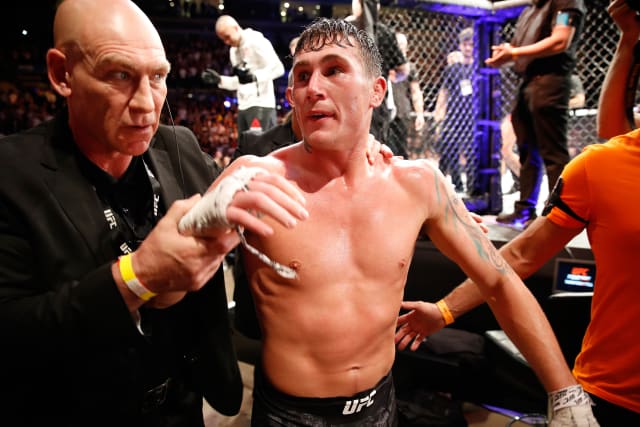 Whittaker was fighting for the first time since losing his belt to current champion Israel Adesanya in Melbourne last year and managed to secure a unanimous decision of 48-47 from the three judges on Yas Island.

Whittaker landed a pair of early jabs in the first round before the Liverpudlian responded with a left elbow to the chin which dropped the Australian.

But Whittaker responded in the second round, his big right hand knocking the Englishman down before he leaned in to use a clubbing elbow on the man on the canvas.

The third round was a close affair, with Whittaker failing on a takedown but managing to land a left hook on the break.

Till struggled to stay as quick on his feet during the final two rounds, with a highlight coming at the end of the fourth when a combination of punches snapped the Australian’s head back.

Whittaker continued to target Till’s lead leg and emerged victorious but not before a slicing elbow in the fifth round opened a huge gash on his head.

Afterwards, Whittaker told ESPN the fight “was so stressful”.

He said: “Honestly, I hope the fans and everybody can appreciate it. Cause that level for me, that was one of the most technical fights I’ve ever had to fight.”