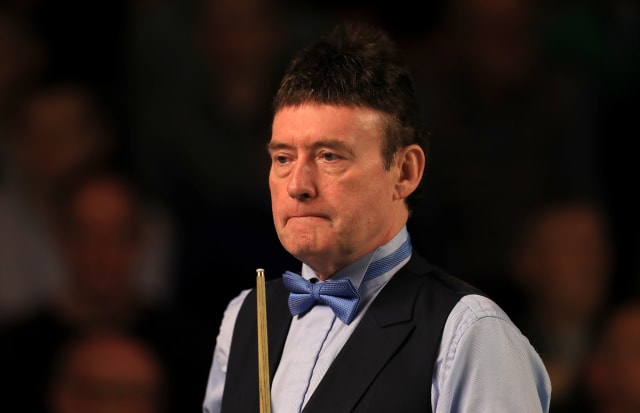 Jimmy White fell short in his latest bid to return to the World Championship as he was beaten by Robert Milkins in the penultimate qualifying round.

The six-time finalist, who has not competed at the Crucible since 2006, lost 6-1 to Milkins at Sheffield’s English Institute of Sport.

A crucial moment came when White, at 3-1 down, sunk the cue ball while potting a black that would have won him the frame.

Ursenbacher, bidding to become the first player from his country to play in the World Championship, fired his highest professional break of 141 in the opening frame and was never behind in the match.

Former world champion Ken Doherty is targeting his first Crucible appearance since 2014 after winning the match that kept his professional snooker career alive.

The 50-year-old, who won the world title in 1997, beat Fraser Patrick in his second qualifying round match on Friday night, where defeat would have seen him relegated from the full-time circuit.

And the Irishman, who potentially faces two more qualifying rounds including a clash with his old friend Mark King on Sunday, revealed his desire to return to the sport’s biggest stage remains as strong as ever.

In a video shown on the World Snooker Tour’s Twitter account, Doherty said: “I’ve played a lot of years in this Championship but it still means a lot to me – it’s the one you want to play in.

“The Crucible is the golden nugget for all these players in the qualifiers. There’s a lot of tough match players and a lot of nerves, but you’ve just got to battle through it.”

Doherty caused Stephen Hendry’s first loss in a Crucible final in 1997 and would go on to reach two more world finals in his career, losing to John Higgins and Mark Williams respectively.

In his most recent appearance in the final stages in 2014, he shocked sixth seed Stuart Bingham in the opening round before losing to Alan McManus.

Now ranked 64th in the world, Doherty admitted: “There was a lot of pressure (against Patrick). When you’re fighting to stay on (the tour), or you just want to stay in the World Championship, it means an awful lot.”