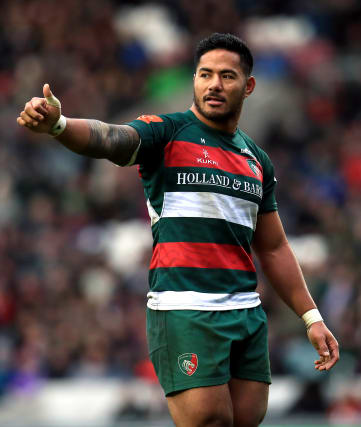 British and Irish Lions star Tuilagi left boyhood club Leicester after rejecting a 25 per cent salary reduction due to the coronavirus impact, and has since signed for Sale.

The 29-year-old has kept his England career alive by staying on home soil and joining Sale, having left Tigers in acrimonious circumstances and as a free agent due to effective contract breaches.

Sale rugby director Diamond has revealed he did not need to give Tuilagi any big sell, hinting in a thinly-veiled barb at Leicester that the Samoa-born powerhouse was relieved in comparison by his uncomplicated approach.

“We had very little conversation, I spoke to him on the Friday once I learned he was a free agent,” Diamond told BT Sport.

“And I just gave him some clarity of where we were going, and what I wanted from him. And that I certainly wanted more than nine games, which was his average number of games for Leicester.

“And we talked about how we would do that, and our driver is to getting him playing for England like he does, but also playing very well for us and hopefully he gets on the Lions tour.

“So not a lot of pressure, just an arm round his shoulder, I told him that we’ll make him feel welcome, and we’ll look after him.

“He sat down in our office and said ‘after our conversation on Friday I’m not speaking to anybody else, I want to come to Sale’. So I got my pen out very quickly!

“To be fair, I have about 30 other people who do the selling for me in the other players.

“Word gets around how we look after lads, the facilities are second to none.

“My style really isn’t showing them round the gym, they are all very similar.

“It’s all about the communication really, what his role is, what I want out of him.

“He liked that direct mentality – something I think he’d been missing.”

Leicester insisted they were forced into drastic cost-cutting measures to offset the coronavirus impact, making 31 redundancies across club staff earlier this month.

Players were asked to take salary cuts, and those who refused opted to leave, including Tuilagi, Kyle Eastmond and Telusa Veainu.

In confirming departures including that of Tuilagi, Leicester chief executive Andrea Pinchen said: “The majority of people are going down that path with us, and a handful couldn’t.”

Tuilagi is already training with Sale, and will be available for the Sharks’ tilt at the Premiership title, when the delayed season resumes on August 14.

Premiership clubs can straight away field new signings who would not have featured until next season, were it not for the current campaign being suspended during lockdown.

Tuilagi has signed at Sale until the end of the 2020-21 season, with Diamond admitting he told the wrecking-ball midfielder that he wants him to feature regularly in Sharks colours.

The potent centre battled a string of groin and knee issues at Leicester, but has been free of those issues for some time, and Sale could be poised to reap the benefit.

“The most crucial thing for me was not pressurising him into signing a long-term contract, just see the year out, perform at your best,” said Diamond.

“If you play as you can do and he gets on the Lions tour and he plays for England etcetera and he does well for us, then he becomes a very valuable commodity. And we’ll do everything we can to keep him.

“But that will be his last contract really, so he’s got freedom really, to do what he wants. And there’s not much in the game that he hasn’t achieved at that stage.”