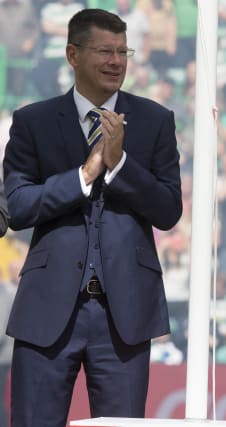 Hampden league chiefs have seen a request for new powers that would allow them to decide the fate of Scottish football in the event of a second Covid-19 outbreak blocked.

The board of the Scottish Professional Football League had sought permission from its 42 members for a rule change that would see the directors take control of crucial decisions in the event of a second spike this season.

The resolution was aimed at preventing a repeat of the bitter fall-out which came after Dundee controversially changed their vote on calling an end to the last campaign.

But the risk of another embarrassing boardroom quarrel remains after the motion was rejected following Friday’s SPFL board meeting.

The league said in a statement: “On March 16, Scottish Government regulations were put in place prohibiting all football. It was only on June 29 that contact training was allowed to resume.

“SPFL clubs voted to curtail Season 2019/20 for the Championship, League 1 and League 2, with the SPFL board being given the express power to curtail the Premiership.

“This express power was exercised on May 18, following agreement by all Premiership clubs that Season 2019/20 needed to be brought to an end.

“Several SPFL clubs requested that the SPFL board bring forward a resolution, which would give the board the express power to manage Covid-19 related disruption during Season 2020/21, without the need to seek rule amendments approved by clubs.

“Accordingly, a written resolution was circulated to all clubs, but this did not attract sufficient support to pass.

“Following a discussion at this morning’s SPFL Board meeting, the board have agreed to move forward in line with the clear will of the clubs.  As a result, the existing rules will remain in place for Season 2020/21, unless any member decides that it wishes to bring forward their own resolution in this area.”

SPFL chief executive Neil Doncaster added: “As a members’ organisation, it is vital that the board listen to the voice of our member clubs.”

Meanwhile, Premiership clubs will be asked this week to vote on whether they want to have use of five substitutes when the season kicks off a week on Saturday.

The International Football Association Board has approved the use of two extra replacements in a bid to ease the strain on clubs as they deal with the pressures of the coronavirus crisis and the SPFL have decided they will implement the new measures in this season’s Betfred and Challenge Cup matches.

But the rule change will only be introduced in the top flight if it can win the support of at least nine Premiership clubs.

Doncaster added: “With a more compressed fixture calendar than we are used to, the board approved the use of five substitutes in our cup competitions primarily out of a concern for player welfare.

“With teams expected to play more frequently and with shorter periods for recovery, the use of additional players in matches will help clubs spread the load throughout the season.

“It is also hoped that this amendment will assist player development, allowing more young players to get experience of competitive senior football during the 2020/21 season.