Nurburgring, Portimao and Imola races added to 2020 Formula One calendar 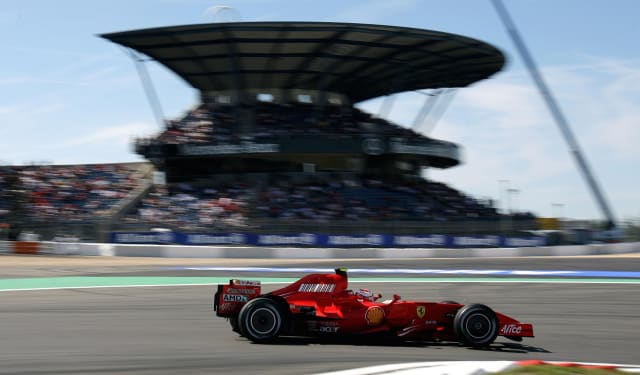 Formula One has confirmed three more European races after abandoning its American swing of the 2020 calendar, with four races in Texas, Mexico, Brazil and Canada all cancelled.

The move comes with coronavirus infection rates in the United States, Mexico and Brazil among the highest in the world.

F1's decision to axe the races clears the way for the sport to return to Imola for the first time since 2006.

The San Marino venue, which is synonymous with the death of triple world champion Ayrton Senna in 1994, will stage its race on November 1. The grand prix will take place over just two days with no practice on Friday.

Nürburgring, Portimão and Imola added to F1 calendar
The logo of the Nürburgring race track seen before the start of the Formula One Grand Prix of Germany at the Nuerburgring circuit in Nuerburg, Germany, 07 July 2013. Photo: Jens Buettner/dpa | usage worldwide (Photo by Jens Büttner/picture alliance via Getty Images)
German Formula One driver Sebastian Vettel of Red Bull crosses the chequered flag to win the Grand Prix of Germany at the Nuerburgring race track, Nuerburg, Germany, 07 July 2013. Photo: David Ebener/dpa +++(c) dpa - Bildfunk+++ | usage worldwide (Photo by David Ebener/picture alliance via Getty Images)
Michael Schumacher jumps in the air on the podium celebrating his victory in the European F1 Grand Prix on the Nurburgring track Sunday Oct 1, 1995.(AP Photo)
The Imola track nestling in the hills
Michael Schumacher of Germany steers his Ferrari on his way to clocking the fastest time, during the qualifying session for Sunday's Formula One Grand Prix of San Marino, at Imola's racetrack, Saturday, April 22, 2006. Michael Schumacher earned the 66th pole position of his career Saturday for the San Marino Grand Prix, breaking the record he shared with Ayrton Senna. (AP Photo/Luca Bruno)
SENNA ACCIDENT -- Italy's Nicola Larini, left, holds his head and Germany's Michael Schumacher, right, wipes a tear from his eyes while talking with Benetton director-general Flavio Briatore, center, on the podium following the San Marino Formula One Grand Prix crash in Imola, Italy, Sunday, May 01, 1994. The drivers were reacting to the news that the Brazilian driver Ayrton Senna was in critical condition at a Bologna hospital after a crash in the race. Later it was announced that Senna haddied after suffering severe head injuries. Schumacher won the race and Larini finished second. (AP-Photo/stf/Claudio Luffoli)
Up Next

The sport's bosses have also confirmed that Portimao will host its first ever grand prix on October 25, with the Nurburgring returning to the calendar a fortnight earlier. The German track last staged a grand prix in 2013. The race in Portugal is set to be open to fans.

Chase Carey, Chairman and CEO of Formula 1, said: "We are pleased that we continue to make strong progress in finalising our plans for the 2020 season and are excited to welcome Nürburgring, Portimão and Imola to the revised calendar.

"We want to thank the promoters, the teams, and the FIA for their full support in our efforts to bring our fans exciting racing this season during an unprecedented time.

"We also want to pay tribute to our incredible partners in the Americas and look forward to being back with them next season when they will once again be able to thrill millions of fans around the world."

The additional three rounds announced on Friday extends this season's revised calendar to 13 races, with two grands prix at Silverstone (August 2 and August 9), and one in Spain (August 16) forming the next triple header.

There will also be rounds in Spa-Francorchamps (August 30), Monza (September 6), Mugello (September 13) and Russia on September 27.

There remains hope a maiden race in Vietnam's capital Hanoi can be arranged for mid-November.

The campaign is set to end with three consecutive rounds in the Middle East – with Bahrain to host two races before the Abu Dhabi season closer in December.

Lewis Hamilton heads to his home race at Silverstone a week on Sunday with a five-point lead over Mercedes team-mate Valtteri Bottas in the championship standings.